Can Anyone Try to Climb Everest?

August 16, 2016 Karl Smallwood
Melissa T. asks: What is the process involved with climbing Mount Everest? Do you need a permit or something or can anyone just try and climb it if they want to try it? 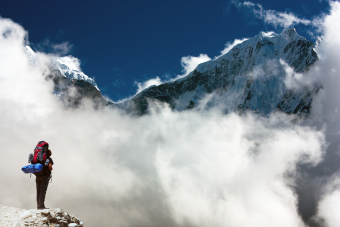 Standing at a foreboding 8,848 metres (or 29,029 feet) high, Mount Everest is recognised as the Earth’s highest mountain. While Everest isn’t generally considered to be the most difficult peak to climb (that honor probably belongs to either Annapurna in Nepal or K2 on the China/Pakistan border), it is the most famous and, as such, sees the most people attempting to scale it each year.  But can anyone just show up and start trekking up the mountain? In a word- no.

The first thing you’ll need is to be over 16 on the Nepali side and over 18 on the Tibetan side.

The second thing you’ll need if you want to climb Everest is money- a lot of it. The exact cost of climbing the mountain varies wildly depending on a number of factors including from which side of the mountain you want to start, how many people you’re attempting to climb with, and what you’re looking for in terms of support.

A bargain basement cost a non-native could theoretically get away with would be in the range of $20,000-$25,000. A more realistic price tag would be closer to $40,000-$60,000 from the Nepal side and about $30,000-$40,000 from Tibet. This covers things like Sherpa guide fees, oxygen bottles (which cost about $500-ish a bottle with a minimum of about 5-6 needed by most), gear, supplies, travel, performance enhancing drugs (about two-thirds of climbers use these according to Dr. Luanne Freer, founder of the “Everest ER”), etc.

If you really wanted to skimp, you could get away with not using extra oxygen, but this isn’t recommended as about 40% of the people who die in the attempt at climbing Everest do so trying to do it without oxygen tanks. This is despite the fact that only about 3% of all climbers make the attempt without extra oxygen. Further, such an attempt will likely result in, at minimum, a small amount of brain damage.

In contrast to the penny pinchers, if you want an ultra-premium package from a given guide-organization, including Sherpas to carry every little thing, meals prepared for you, plenty of bandwidth to Skype people back home as you summit (yes, there is WiFi all the way up these days), many oxygen bottles stored along the way, etc. you can pay as much as $200,000+ per person to climb the mountain in style.

It should be noted, however, that even with such a package, you’ll still need to be in exceptionally good shape and have a great deal of experience in extreme mountain climbing if you want to have a realistic chance at actually making it to the top.

On that note, another thing you’ll need is a permit to climb Everest, which you can apply for from either Nepalese or Tibetan authorities, depending on which side of the mountain you want to make your attempt on.

As for the cost of these permits, which is included in the aforementioned price estimates, up until recently this was largely dependent on the size of the group you were planning to climb with. For instance on the Nepalese side, a group of seven people could purchase a permit granting them permission to climb for about $10,000 per person. In contrast, for a person wanting to buy a permit just for themselves, this used to cost a staggering $25,000.

However, the Nepalese government recently slashed the price to $11,000 in 2015 and ceased giving any sort of group discount. This change is meant to discourage people from traveling in large groups as congestion at the summit has become a bit of a problem, with the result occasionally being people having to abandon their attempt- or try again the next day if they have the supplies- if the wait was too long near the top. (Note- the permit fee for someone from Nepal is drastically cheaper at only $750 per climber.)

As for the less popular Tibetan side, the permit there will currently cost you $7,000 per person.

The money from these permits goes to the respective government of the country you’re climbing from and is partially spent on maintaining the various camps on the way to the summit and paying the staff who work there. Said staff are also responsible for cleaning and maintaining at least parts of the mountain, a job that’s exactly as dangerous as it sounds, with several Sherpas having been killed over the years cleaning trash from the mountain’s higher areas.

One thing that isn’t guaranteed to be collected, however, is your body if you die too far up.  As such, there are around 200 bodies still up on the mountain from the near 300 or so people who’ve died in the attempt at climbing Everest in the last century. 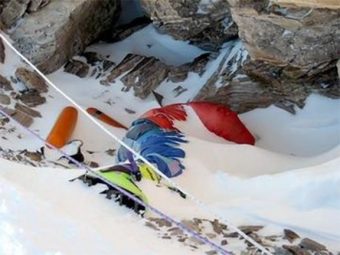 Some of these bodies at one time or another functioned as something of additional navigation markers, though not to be fully relied on given they occasionally disappear off the path. For instance, “Green Boots“, an unknown Indian hiker’s body, marked a certain point from 1996 to 2014, at which point the body disappeared, presumably having been tossed over a cliff or the like in the best burial possible given the circumstances. The body of American Francys Arsentiev was removed from the path in this way in 2007, nine years after her death. (More on her exceptionally sad story in the Bonus Facts below.)

On this note, any group wishing to climb Everest on the Nepal side also has to pay a $4000 deposit that is only returned if the individual returns with their trash. This fee is meant to discourage people just throwing their garbage onto the mountain as they trek. This isn’t just a problem with having to send people up to collect the garbage, but also because the mountain is revered as holy by some Tibetan and Nepali people.

But let’s say that you’re an expert climber who has all the gear, experience, and know-how to conquer Everest, but don’t want to pay for permission to climb it. What exactly is stopping you from just climbing it when you please?  Mainly that it’s a really bad idea on several points.

First, if caught, you will incur a massive fine and some legal troubles. A second thing to keep in mind is that the money from permits, along with paying for the upkeep of the various camps, also pays for potential rescue and evacuation teams who are on standby in the not totally unlikely event something goes wrong.

Obviously rescue isn’t generally possible in the higher regions unless someone carries you down to base camp, but the teams are there for when an attempt can be made. However, the Nepalese government note that it is under no obligation to rescue those who are trespassing on Everest and, as such, anyone who gets into distress without getting a permit faces the very real possibility that no one will bother to come help them.

Further, given that such a trespasser would likely be attempting to climb the mountain with virtually no support (few guides are willing to take on a non-permitted climber), it is entirely likely said individual would get in life-threatening trouble, regardless of how experienced they are.

A third and decidedly less depressing reason that climbing Everest without a permit is a bad idea is that, if you manage to make it to the top of Everest and then climb back down without being caught, you won’t be recognised as having done it. This may or may not be something you particularly care about.

Something you will care about, however, is that there are reports of Sherpas beating up people they find trying to climb Everest without a permit. As one permitted climber who witnessed such a thing noted,

The Sherpas are not to be trifled with either.  In one incident in 2013, a couple climbers, who reportedly treated a Sherpa more than a little disrespectfully, were nearly killed by a mob of dozens of Sherpa guides at the base camp. They were only saved when other climbers intervened long enough for the pair to make an exceptionally dangerous rapid retreat down the mountain. As one of the climbers stated,

We got kicks and punches and Ueli got a rock in the face. One of the Sherpas pulled a knife on Simone, but he managed to turn and the knife hit his hip belt…. There was a… period where we all thought we were going to get stoned to death.

As to why he thought it happened, said climber stated, “There’s an underlying feeling among the Sherpas that they’ve been treated quite badly by Westerners and that clients don’t have any respect for them. If you look around at how incredibly luxurious some base camps are, you can see their point…”

So to sum up: Can just anyone climb to the highest peak Earth has to offer? Not really, unless you happen to be an adult in great shape, have a lot of extra cash to burn, proper documentation, and feel like giving the Fates a 2%-3% chance to kill you within a couple week period. 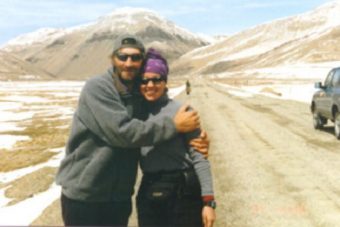