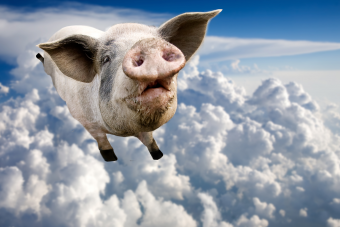 Imagine if you will that you’re sitting in an airport waiting to go on vacation. Suddenly and without warning you hear a voice over the tannoy system informing you that every single plane scheduled that day had been grounded. As your mind begins to think of all the horrible things that could have caused the delay, you hear the voice again informing you that flights have been grounded not by a freak storm, crash or technical glitch, but by an escaped flying pig.

As unbelievable as it’s going to sound, this is genuinely something that once happened in London in the 1970s thanks to the band Pink Floyd and their gigantic pig shaped balloon.

In 1976, Pink Floyd recorded an album called Animals which drew inspiration from the 1945 novel Animal Farm, a thinly veiled allegory of Soviet communism that prominently features pigs as characters.

After the album was recorded, the band met with a design team called Hipgnosis to create the album’s cover. Despite being regarded by many as some of the best album designers of all time (working with and designing albums for the likes of AC/DC, ELO, Styx and Rainbow), all of Hipgnosis’ ideas fell flat with the band. For instance, a notable idea pitched by the group was an album cover featuring a young boy walking in on his parents in the middle of a bout of vigorous intercourse- an idea the band unsurprisingly poo pooed. 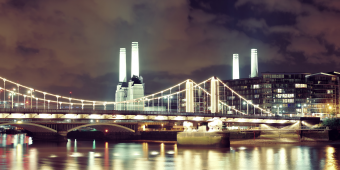 After some deliberation, bassist Roger Waters suggested to Aubrey Powell of Hipgnosis that they use Battersea Power Station as the backdrop for the cover. Waters later explained to Rolling Stone, “I’d always loved Battersea Power Station, just as a piece of architecture. And I thought it had some good symbolic connections with Pink Floyd as it was at that point. One, I thought it was a power station, that’s pretty obvious. And two, that it had four legs. If you inverted it, it was like a table. And there were four bits to it, representing the four members of the band…” (I’m getting a definite This is Spinal Tap vibe here… Just me?)

The band had recently commissioned a gigantic 40 ft. inflatable pig for their upcoming tour.  Putting two and two together, Powell stated in an interview that when the pair were discussing the power station idea, “Roger and I both looked up at the Station, and said, ‘let’s fly the pig between the chimneys’. Just like that.”

After applying for what we can only assume was an ungodly amount of permits to float a giant balloon shaped like a pig above an (at the time) operational major power station, the band with help from Powell picked out the best angle from which to shoot the cover. Other prep work included hiring an expert marksman who was given orders to shoot the pig down should it escape. The band then decided on a date on which to shoot the photo- December 2, 1976, a day which was supposed to be mostly clear with some cloud, which the band specifically wanted so that the sky didn’t look “boring”, or as boring as it could be with a giant floating pig in the middle of it.

However, on the day of the shoot, the pig wouldn’t inflate for reasons never explained in any interview we could find. This annoyed Powell to no end because, “that day there was the most incredible, Turner-esque sky. But for some reason, the pig wasn’t inflating. I shot the Station anyway, because the sky was so amazing.”

After trying and failing to inflate the pig for several hours, the band gave up and they agreed to come back the next day.

The group returned and, oddly, this time the pig inflated just fine. After painstakingly attaching the pig to Battersea’s southernmost chimney, disaster struck as the tether holding the balloon in place broke during a wind gust, causing the gigantic inflatable porcine to begin lazily drifting away.

The pig was loose.

So what happened to the sniper they hired for just such a bizarre event? Well, apparently the manager simply forgot to tell him or his gun that they required his services the next day. So he never showed up.

As the pig began to climb ever higher, rising to heights no pig, inflatable or otherwise, had ever hoped or dared to dream, a terrible realisation crept over those watching it sail toward the heavens- the pig was flying directly towards Heathrow airport. As panic began to set in, the band did what many would do in such a situation, according to Powell, “Pink Floyd left the site.”

Moments after the skyward swine escaped, Heathrow officials received several communiqués from pilots in passing planes matter-of-factly telling them that they’d just seen a giant pig float past their windows. After realising that the calls weren’t a joke, all flights from the airport were grounded.

As the pig danced around in the sky, police helicopters and eventually the RAF were called in to chase it down, but to no avail; by the time they arrived the pig was gone and, despite their sincerest efforts, they couldn’t find it.

With the pig off enjoying its freedom and the band having absconded the scene of the crime, this left Aubrey Powell to take the fall. After police arrived, according to Powell, he was promptly arrested and taken in for questioning.

Meanwhile the band, who’d managed to retain their freedom, set about trying to find the pig- giant inflatable pigs not being cheap, after all. Using their status as Pink Floyd, they were able to convince radio stations across the country to plead with listeners to keep their eyes peeled for a giant floating pig, providing a number they could call if they happened to see it.

Almost immediately this number was flooded with prank calls because, of course it was. However, at around 9:30 pm that evening, a phone call from an irate farmer in Kent (about 40 miles or 65 km away) came in, with the farmer sharply asking “Are you the guy looking for a pig?”

After having this fact affirmed, the farmer angrily told the group that such an object had landed on his farm and was currently scaring all his cows. After getting the man’s details, Powell, along with the police, went and collected the swine which was miraculously undamaged from its adventure. 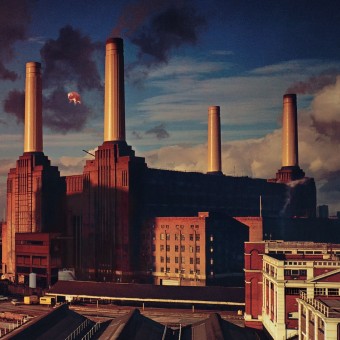 Surprisingly, the police and officials at Battersea allowed the band to come back and re-shoot their album cover, with the proviso that they actually bring the sharpshooter along this time. Although Powell was able to get shots with the tethered pig, the sky that day was entirely clear and he ended up hating how they looked initially. However, he was able to get the shot he wanted by using a photo from the first day and superimposing the pig on top of it. Sans Photoshop, this did not look that great if you looked too closely at the picture. As such, this all went against Waters’ original requirements that the “picture should be real”, rather than superimposing the pig, as Powell had at one point suggested before the whole debacle. This nevertheless all ended up working out for the band swimmingly. As Powell later noted, the escaped pig “was front-page news: Pink Floyd couldn’t have got better publicity if they tried.”

After its little adventure, the pig went on tour with the band later the following year.