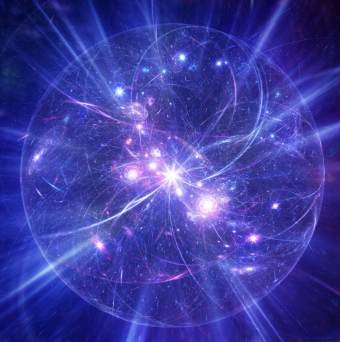 The idea of absolute hot springs from its better-known cousin, absolute zero, which, as you may recall, is 0 K, -273.15° C or -459.67° F. And although abridged definitions of the lowest temperature will frequently state it is the point at which matter stops moving, this is technically incorrect. Absolute zero is actually the point where molecular motion no longer produces heat (but does have zero-point energy).

Conversely, absolute hot, then, could be defined as the point where molecular motion couldn’t produce any more heat, no matter what the circumstances.

In the Standard Model of the universe, the hottest possible temperature ever reached occurred a fraction of a second (10-43) after the Big Bang. During that minuscule period of time (called one Planck time), the universe is thought to have only been one tiny Planck length (10-35 meters) and have reached absolute hot at 1032 K (called Planck temperature). For comparison, our Sun is a measly 1.571 x 107 K at its center and the highest temperature ever created by man is currently 5.5 X 1012 K.

Beyond Planck temperature being the hottest temperature ever theoretically reached in our universe, physicists hypothesize that at any temperature higher than Planck, the gravitational forces of the affected particles would become equally as strong as the other fundamental forces (electromagnetic and weak and strong nuclear), resulting in all four becoming unified as one force. What happens then?  Nobody knows as currently accepted conventional models of physics break down after that point. Of course, all of this is theoretical, since no one has yet to come up with an accepted quantum theory of gravity. As Nobel laureate Steven Weinberg described it, whatever happens at temperatures above 1032 K remains obscured by a “veil.”

It should be noted that not all physicists follow the Standard Model, and some prefer, for instance, String Theory, which attempts to describe all four fundamental forces as different manifestations of a single basic object (a string). For string theorists, the highest possible temperature is far lower than that postulated by the Standard Model; called the Hagedorn temperature, it is the point at which ordinary matter is no longer stable and either “evaporates” or changes into quark matter. Under this theory, the point at which that happens, or absolute hot, is thought to be just 1030 K, or about 1% Planck temperature.