There’s a reason there’s the expression “busy as a bee.” These buzzing insects’ entire lives are dedicated to making sure the hive keeps humming and the next generation of bees are born. Worker bees are consistently building, cleaning and protecting their home. When they are not tending to the hive, they are foraging for food to feed the queen and drones. This food is a mixture of pollen, nectar, water and plant sap, which is eventually transformed into a honey, a favorite treat for both human and bee alike.

With vegan diets on the rise, rules and questions around this particular lifestyle are constantly being talked about. Perhaps one of the most debated issues among vegans is the question of honey.

Humans have eaten honey for centuries. The earliest known depiction of the human/honey connection comes from a 15,000 year old cave painting in Spain’s Valencia region depicting a man climbing a cliff while holding a basket filled with honey combs as bees buzz around him. In ancient Egypt, bees were considered sacred (thought to come from the tears of the Sun God Ra) known not only for the honey they produced but the fact that they pollinated essential crops. In fact, Egyptians used to float entire hives down the Nile to make sure the bees could reach all the crops. 2500 years ago, the Greeks had laws on the books to make sure that beehives were at least 300 feet from each other to prevent too many bees in a concentrated area. In Greek mythology, Zeus’s mother fed him honey as an infant, earning honey’s moniker as the “food for the gods.” Although not native to North America, honey bees were deemed a necessity and brought across the Atlantic to the New World in the 17th century by European settlers. Wary of these buzzing yellow-striped stinging insects, American Indians called them “white man’s flies.”

Although there are perhaps as many as 20,000 species of bees in the world, only seven make honey. The most common honeybee is the European honeybee, with billions of them worldwide. Domestic bees and managed colonies (as in ones that are for commercial production of honey and tended to by human beekeepers) make up the majority of them, especially with wild bees continually decreasing due to much researched circumstances. The bees survival is imperative for humans beyond simply just honey; bees are responsible for upwards of fifteen billion dollars in crop value each year due to their pollination abilities. 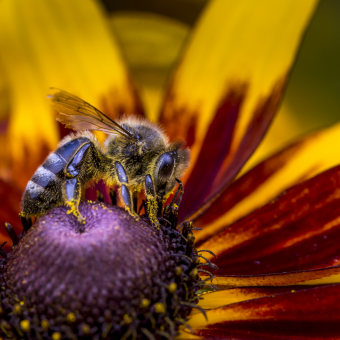 Now to the question at hand- is honey vegan?  By nearly every definition, honey is an animal byproduct created through chemical process. First, the worker bees go out into the world to forage for the sugary fluid secreted by plants known as nectar. Traveling up to six miles, when the bees find nectar, they suck it up with their long, tube-like tongue and store it in a secondary stomach known as the “crop.”

Due to being able to hold its own weight (approximately 70 milligrams) in nectar, bees can visit up to 1500 flowers in one nectar-searching trip. When the bee returns to the hive, it disposes of the collected nectar by regurgitating it into a mouth of another bee, who regurgitates to another bee and so on until it finally ends up in a honeycomb. This whole regurgitating process allows the nectar to be broken down by the enzymes in the bees’ stomachs which makes it more suitable for long term storage. When the partially digested nectar is in the honeycomb, bees speed the evaporation process by fanning their wings rapidly. When it’s sufficiently dry, bees seal the honeycomb with a secretion from its abdomen – which we know as beeswax. Sealed from air and moisture (and thanks to some of its innate properties), honey can last (for all practical purposes) forever and provides a perfect food source for the hive during the harsh winter months. Of course, it also provides a delicious sweet treat for humans (and other animals).

In 1944, Donald Watson essentially created the modern vegan movement by organizing the Vegan Society – the word “vegan” taken from the beginning and ending of the word “vegetarian.” His motive for doing so was due to his affinity for animal life, believing in not only abstaining from consuming animal flesh but any animal byproduct that had unjust harm brought to it. As expressed in Watson’s original treatise on being vegan,

Veganism is a way of living which excludes all forms of exploitation of, and cruelty to, the animal kingdom…. It applies… to the exclusion of flesh, fish, fowl, eggs, honey and animal milk…

According to Watson, taking honey from a hive hurts bees, in that it is essentially stealing a much-needed food from an animal. Additionally, commercial bee hives control the process of honey making, stacking them in removable trays, trapping the queen in a certain part of the hive, and “smoking out” hives when retrieving the honey. In terms of Watson’s original intention, honey cannot be vegan due to the methods used by commercial beekeeping.

But there are those who argue that if one wants to truly adhere to the original vegan lifestyle, then eating properly produced honey is okay. Since bees produce honey naturally, cultivating it in a way that doesn’t harm the bees allows it to be vegan. This means constructing hives that are like the ones bees have in the wild and waiting for a wild swarm of bees to make it their home, as opposed to forcing a swarm of domestic bees into it. Additionally, care must be taken to leave the bees plenty of honey for their own needs. There’s also no use of smoke, antibiotics or chemicals on the hives. To solve the problem of opening the hives and disturbing the bees to collect the honey, natural beekeepers invented a tap mechanism that allows excess honey to simply drip into a tube and out the hive.

While many vegans abstain from all animal byproducts simply on principle (or at least attempt to, something that is exceptionally difficult (if not impossible) even for the best intentioned individual), the modern vegan movement that was born in 1944 focused primarily on the suffering of animals as the key point. If honey can be obtained without making the bees suffer in any way then, in theory, it could be part of the vegan diet based on those precepts.

On the other hand, some vegans think this doesn’t matter at all as it’s generally thought that insects cannot feel pain (or at least are probably not consciously aware of it even if their brains react to such inputs). Beyond this, the minimal number of bees harmed in the production of honey for human consumption is seemingly no more than the number of insects harmed in the production of vegetables, even of the organic variety.

From all this, it is perhaps no surprise that whether honey is considered vegan or not varies depending on one’s exact definition of “vegan” which in turn varies from vegan to vegan and group to group. For instance, Vegan Outreach and Vegan Action both consider honey consumption to be acceptable for vegans (leaving it as a matter of personal choice), while the American Vegan Society does not.