This Day in History: November 2nd- A Committee 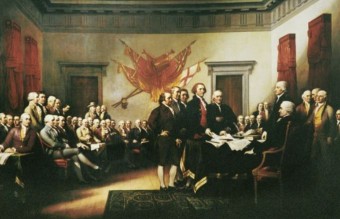 The Sons of Liberty were always busy organizing new public protests and resistance strategies against unpopular British policies. They continually looked for new ways to educate the citizens about the pressing issues of the day, hoping to encourage them to become more active politically.

For instance, a very troubling development was in the offing in Massachusetts by the fall of 1772. There were rumors that judges of the Superior Court would no longer be paid by the colony, but instead by the Royal Treasury. Bostonians were highly suspicious that this would tilt the scales of justice in favor of England and clamored for their selectmen to address the problem.

When the board met to debate a solution, Sam Adams suggested the creation of a corresponding group to gauge where other Massachusetts towns stood on the issue and to help direct public sentiment. That sounded reasonable enough to everyone present, so on November 2, 1772, the Boston selection voted to establish a 21-member Committee of Correspondence.

Their first order of business was to draw up a series of reports outlining the rights of the colonists, and then systematically laying out how blatantly British Parliament was infringing on them. These articles were distributed all over Massachusetts as a single document nicknamed the Boston Pamphlet, but officially known by the far more catchy title of The Votes and Proceedings of the Freeholders and other Inhabitants of The Town of Boston, In Town Meeting assembled, According to Law.

Effective, towns all over the state followed Boston’s example. Committees of Correspondence spread quickly in urban areas, but Adams and the other original members were quick to encourage groups to form in inland, rural areas.

The Committees used the British postal service to transport their pro-Patriot messages, stirring up the populace against Great Britain- a lovely little bit of cheek. Most of what they did was confined to the written word, but on occasion they ventured out of their comfort zone, such as when they aided and abetted the Boston Tea Party.

As tensions with Great Britain grew, and revolution became more and more inevitable, the Committees of Correspondence became the indispensable backbone of new colonial communication and coordination of efforts; each of the colonies had a standing committee towards this end. These Committees would also serve as the prototype for the first unified governing body in the United States, the First and Second Continental Congresses.