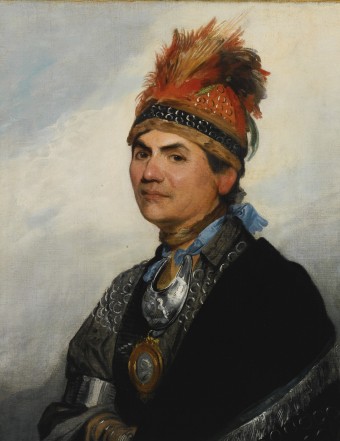 The Native Americans and the colonists lived in closer proximity than modern Americans often realize. They worked as tailors, carpenters, whalers, and in other contemporary occupations. Native Americans were an integral part of the colonial economy, and their presence in colonial villages was completely unremarkable on the whole.

When the Revolutionary War broke out, many Native Americans fought with their colonial neighbors against the British. But a great many more sided with King George. Their biggest incentive for doing so was the fact that the King had offered to protect their lands from the grabby colonial settlers who kept encroaching further and further into Indian territory.

One of the most famous Native Americans of that period was Joseph Brant. Born Thayendanega, meaning “he places two bets,” in March 1743 near the Cuyahoga River in Ohio, Brant is remembered as one of the greatest Mohawk political and military leaders. Brant not only fought tirelessly in battle but also to protect the sovereignty of his ancestral lands.

Brant joined the British army at age 15 and had studied at Dartmouth College where he became an interpreter for British officials. His sister was married to William Johnson, a top member of the British Office of Northern Indian Affairs. Joseph was cultivating a large network of important connections from a very young age. He was already a captain before the American Revolution.

When the war did break out, Brant ignored the order of the Council Fire of the League, which dictated that the Indians would butt out of this conflict that most of them considered “a family affair.” Brant believed that the colonists’ constant intrusion on Mohawk land and his good-standing with the Brits made victory not only possible but probable.

During the early years of the war, Brant was a brilliant leader and strategist. In 1777, he traveled to London to lobby in person for material and political support from George III. After returning to America, he continued to grow in legendary status with the British and was more hated by the minute by the colonists.

Stories spread of his heinous war crimes at the Wyoming Valley massacre and Cherry Valley massacre, fueling the fires of racial hatred and violence. That said, there are also those who claim Brant showed remarkable restraint during these battles, demonstrating great compassion towards women, children, and noncombatants in particular, and encouraged others to do the same.

Whatever the case, the Native Americans didn’t make out as well as they had hoped once the war ended and lost much of their ancestral lands in America despite Great Britain’s assurances.  Land grants were given to the Indians living along Grand River in Ontario, but they were never given legal title to the property, even after Brant made another trip to England pleading his people’s case. He came away with compensation for Mohawk losses suffered during the Revolutionary War and funds to construct an Episcopal church, but no title to the Grand River Reservation.

Brant tried to incite the Native Americans in the western United States to form an all-Indian confederacy to fend off the expanding presence of the new United States, and encouraged those back east to resist any further encroachment on their territories. But in the end, he moved to Canada, had a mansion built, and ran a prosperous colonial style farm with a host of servants and the finest of everything. At this point in his life, Brant was seemingly much more at ease among the Western moneyed aristocrats than he was with the humble farmers who had been crying out for revolution.

Joseph Brant died on November 24, 1807 at his home on Grand River, Ontario. He was buried in the churchyard of the Episcopal church he made sure was built there. His last words, spoken to his nephew, were reported to have been, “Have pity on the poor Indians; if you can get any influence with the great, endeavor to do them all the good you can.”