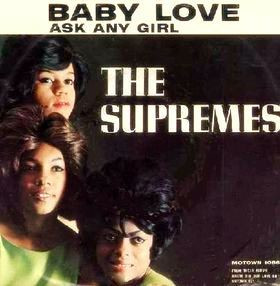 Diana Ross, Mary Wilson, and Florence Ballard had to be tenacious to get their big break. When they first auditioned for Berry Gordy at Motown under the group name The Primettes, he told them to come back after they’d finished high school. Undaunted, the three girls loitered around the Motown office after school, jumping at any chance to add hand claps or backing vocals whenever the opportunity arose.

When Gordy finally did sign the trio, with the name changed to The Supremes, in early 1961, they were hardly an overnight sensation. By the summer of 1964, the girls had released several singles, but with only marginal success, earning them the moniker “the no-hit Supremes” at Motown. Finally, that August “Where Did Our Love Go” shot to number one on both the pop and R&B charts. Within a few short weeks, The Supremes went from having no billing on the Dick Clark Caravan of Stars show to headlining it.

Not wanting to mess with success, Motown head honcho Berry Gordy wanted the Holland-Dozier-Holland follow-up to the Supremes’ first number one hit “Where Did Our Love Go?” to stick with the same formula.

The result was “Baby Love,” which reached the top of the American Billboard chart on Halloween of 1964. The song also earned the Supremes their first, and as it turned out only, number one single in the United Kingdom when it went to number one in the UK on November 18, 1964. This gave the Supremes the distinction of being the first girl group ever to have a number one single on the UK charts. It remained in the top position for two weeks until being dislodged by the Rolling Stones “Little Red Rooster.”

The Supremes were decidedly different from most other black girl groups that preceded them. Much of this had to do with Berry Gordy and Maxine Powell, the latter running Motown’s finishing school and Artist Development department. Powell’s goal for her charges was to get them to a state of refinement that they’d be “prepared to perform before kings and queens.” Gordy wanted all of his artists to appeal to both black and white audiences, and to dispel the myth that black performers were unrefined. In the Supremes, it was “mission accomplished.”

They dressed in haute couture fashion and wore elaborate makeup and wigs. They performed elegant, choreographed moves to their highly melodic songs. Everything about the Supremes was feminine, graceful and classy. Onstage at least. Behind the scenes, things often got heated as Diana Ross took more of the spotlight, relegating the arguably equally talented Mary Wilson and Florence Ballard to the shadows.

But before things went horribly awry, the Supremes enjoyed a string of hits including “Back in My Arms Again,” “Stop! In the Name of Love,” “I Hear a Symphony,” “You Can’t Hurry Love,” “You Keep Me Hangin’ On,” “Love Child,” and “Someday We’ll Be Together.”