This Day in History: October 27th- Puritans vs. Quakers, The Boston Martyrs 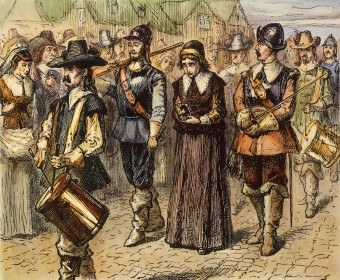 Although the Puritans partially came to America to escape religious persecution, there was an abundance of it to be found in the Massachusetts Bay Colony… except it was them doling it out this time. On the receiving end were the Quakers- members of the Religious Society of Friends, a group that the Puritan leaders generally felt represented the pinnacle of heresy.

The Quakers first came to the American colonies when 8 members of the religious sect arrived in Boston aboard the Speedwell on July 27, 1656. The following year, another 11 arrived aboard the Woodhouse.

The Puritans in the Massachusetts Bay Colony certainly didn’t roll out the Welcome Wagon. In fact, they promptly arrested the Quakers upon arrival. Undeterred, the Friends were unapologetic in their efforts to spread their flavor of Christianity.

To try to solve the problem, the Puritans passed laws to deter more Quakers from entering the colony. Shipmasters could be fined for giving them passage; Quakers could be stripped to the waist then whipped and imprisoned; and several Quakers had their ears cut off.

It didn’t work. The Quakers kept right on coming back, continuing to spread their message. In fact, the colony’s soon to be chief Quaker nemesis, Mary Dyer, specifically came to the colony because of the persecution, wanting to support her fellow Friends in their time of need.

As a result, on October 19, 1658, Massachusetts lawmakers passed more legislation to show that they really meant business. From then on any Quaker who’d been banished would be executed if they dared to return to the colony. Given that just being a Quaker was a banishable offense, this effectively made it so that the colony had a two strike and you’re out death penalty policy towards Quakers.

By the following year, with much trepidation by some in the community, they got to take the law for a test run. William Robinson, Marmaduke Stephenson, and the aforementioned Mary Dyer had all been banished in September of 1659; but, “moved by God,” to come to try to stop the Quaker persecution in the colony and spread their teachings, they all three returned about a month later. All three were sentenced to death by hanging.

Their date with the gallows was set as October 27, 1659. Robinson and Stephenson were led from the jail while Dyer emerged from the House of Correction. The older woman stood between the younger men and held their hands as they walked toward, not the Boston Common as you’ll often read, but the Boston Neck near the present day intersection of Washington and West Dedham Street.

There was an immense crowd of people gathered around the tree that served as a gallows for Boston’s condemned, and many didn’t take kindly to Mary’s scandalous hand-holding with two men that were not her husband. Dyer reportedly responded to this complaint by stating, “It is an hour of the greatest joy I can enjoy in this world. No eye can see, no ear can hear, no tongue can speak, no heart can understand the sweet incomes and refreshings of the spirit of the Lord which now I enjoy.”

William Robinson was the first to ascend the ladder next to the tree limb that secured his noose. Then the support was pulled away and his execution was soon complete. Marmaduke Stephenson went next.

Finally, Mary Dyer stood with her own noose around her neck. Her arms, legs, and skirts were bound (the latter for modesty’s sake). Lastly, a handkerchief was placed over her eyes.

But it was not the end for her; the leaders of the colony did not want to execute a woman simply for being a Quaker.

Instead, she was granted a last minute reprieve. In a pre-arranged decision, unbeknownst to her, said leaders decided to give Dyer 48 hours to skedaddle out of Massachusetts. They had simply wanted to give her a good scare to show Dyer they were serious, and hopefully rid themselves of her for good without having to kill her.

Dyer was not unknown to them and had previously been run out of the colony for matters unrelated to being a Quaker.  She was a former Puritan member of the colony (arriving in 1635) before getting caught up on the losing side of the 1636-1638 “Antinomian Controversy,” among other things centering around the issue of whether salvation was given via “free grace” rather than one’s works being counted for or against you. The idea of “free grace,” among other ideas proposed by the dissenters, was seen as heresy by the town leaders. They would later use Dyer giving birth to a “monstrous” stillborn baby on October 11, 1637 as evidence of God’s wrath against her heresy.

In fact, when then Massachusetts Governor John Winthrop found out about the secret stillborn birth that had been kept quiet specifically because of the deformities, he even went so far as to take a mob of about “100” people to dig the baby up. Beyond spreading the word of the deformities far and wide to support his cause, Winthrop also described what he found in his journal:

It was of ordinary bigness; it had a face, but no head, and the ears stood upon the shoulders and were like an ape’s; it had no forehead, but over the eyes four horns, hard and sharp; two of them were above one inch long, the other two shorter; the eyes standing out, and the mouth also; the nose hooked upward; all over the breast and back full of sharp pricks and scales, like a thornback, the navel and all the belly, with the distinction of the sex, were where the back should be, and the back and hips before, where the belly should have been; behind, between the shoulders, it had two mouths, and in each of them a piece of red flesh sticking out; it had arms and legs as other children; but, instead of toes, it had on each foot three claws, like a young fowl, with sharp talons.

Needless to say, historians think his various accounts were exaggerated to support his position.

Whatever the case, Mary Dyer and her husband, along with many others, were subsequently run out of town via banishment or in many cases simply being disarmed and shunned within the colony until they decided to leave. About fifteen years later in 1652, she returned to England, ultimately met George Fox (the founder of the Quaker sect) and converted. She headed back to the New World in 1657, bringing us back to Dyer’s mock execution and subsequent reprieve.

While you might think she’d be happy about not being hanged, nothing could have been further from the truth. The next day she wrote to the General Court stating,

My life is not accepted, neither availeth me, in comparison with the lives and liberty of the Truth and Servants of the living God for which in the Bowels of Love and Meekness I sought you; yet nevertheless with wicked Hands have you put two of them to Death, which makes me to feel that the Mercies of the Wicked is cruelty; I rather chuse to Dye than to live, as from you, as Guilty of their Innocent Blood.

Death was simply not something she feared so the scare tactic didn’t work on her.

However, Dyer did leave for a time, seeking shelter along with other Quakers at the appropriately named Shelter Island, owned by Nathaniel Sylvester. But eventually she decided to go back to push the matter further. In the interim, other Quakers had been arrested for violating their banishment, but the colony was hesitant to hang them owing to the public outcry the previous hangings had created back across the pond. Given this, Dyer felt that by returning to the colony, it would either force the leaders to change the law concerning executing Quakers or they’d be forced to execute a woman for no other crime than being a Quaker. And as executing male Quakers had been controversial, doing the same to her would be a PR nightmare for the colony.

In May of 1660, she arrived back in the colony. A little over a week later, Dyer was brought before Governor John Endicott, at which point the following conversation was recorded:

Endicott: Are you the same Mary Dyer that was here before?

Dyer: I am the same Mary Dyer that was here the last General Court

Endicott: You will own yourself a Quaker, will you not?

Dyer: I own myself to be reproachfully so called.

Endicott: Sentence was passed upon you the last General Court; and now likewise–You must return to the prison, and there remain till to-morrow at nine o’clock; then thence you must go to the gallows and there be hanged till you are dead.

Dyer: This is no more than what thou saidst before

Endicott: But now it is to be executed. Therefore prepare yourself to-morrow at nine o’clock.

Dyer: I came in obedience to the will of God the last General Court, desiring you to repeal your unrighteous laws of banishment on pain of death; and that same is my work now, and earnest request, although I told you that if you refused to repeal them, the Lord would send others of his servants to witness against them.

And so it was that on June 1, 1660, she once again found herself with a noose around her neck. But the leaders of the colony still didn’t want to hang her, offering her a chance to escape the hanging if she’d just repent her wicked ways. She reportedly responded, “Nay, I cannot; for in obedience to the will of the Lord God I came, and in his will I abide faithful to the death.”

When she was then told her blood was on her own head, she reportedly stated,

Nay, I came to keep bloodguiltiness from you, desiring you to repeal the unrighteous and unjust law of banishment upon pain of death, made against the innocent servants of the Lord, therefore my blood will be required at your hands who willfully do it; but for those that do is in the simplicity of their hearts, I do desire the Lord to forgive them. I came to do the will of my Father, and in obedience to his will I stand even to the death.

Finally, the support was kicked out from under her and the colony was rid of Mary Dyer once and for all.

This didn’t have the intended outcome the Puritan leaders were going for. News of the execution of Mary Dyer spread like wildfire all the way back to England and as a result of this particular brand of religious persecution (including the later hanging of Quaker William Leddra), King Charles II stepped in and in 1661 put the kibosh on the practice of executing or arresting people just because they were Quaker.

As a way around this, the “Cart and Tail Law” was passed in the colony where instead of arresting the Quakers for being Quaker, the Quakers would simply be stripped to the waist, then dragged through town behind a cart while being whipped. They could then potentially be dragged to another town within the colony to receive the same treatment. This was repeated until they’d find themselves unceremoniously deposited in a bloody heap outside of the colony where they were let go. Unfortunately, not everyone survived the transport method.

This eventually drew the attention of the rulers back in England and further decrees were sent over forbidding such atrocities. However, there are accounts of such acts continuing for a few decades after until popular sentiment, along with a string of royal decrees, more or less ended this sort of overt legal persecution of the Quakers.