What are the Black Spots on Corn Chips?

October 30, 2015 Samantha
C. Lani asks: What are those little black spots on some kinds of chips? 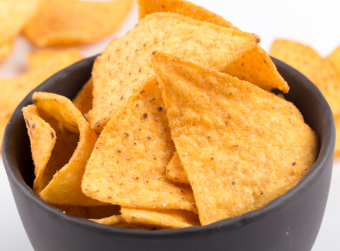 Corn and tortilla chips are speckled with black spots, but what exactly are they?

The staple ingredient for both corn and tortilla chips is, of course, corn. An ear of corn is made up of individual rows of kernels, and each kernel is attached to the cob via the tip cap located at the very bottom of the kernel.

Strip away the tip cap and the hilum is revealed. The hilum is what seals the base of each kernel and draws in water and other nutrients needed during the growth process. The hilum, in a way, serves as a sort of umbilical cord for the kernel. Once the kernels detach from the cob, the hilum remains as a type of scar from where it was connected. 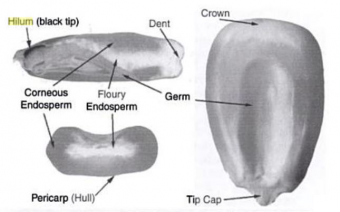 The hilum starts out clear then progresses to light green, then light brown, and finally black, which shows up on more mature kernels. It is these mature kernels that are used to make corn and tortilla chips. Since these specks of hilum do not disappear during the cooking process, they remain visible in the final food product. In addition to corn and tortilla chips, the black hilum can also typically be seen on taco shells, corn tortillas, and other similar foods made with corn.