September 22, 2015 Melissa
Mark R. asks: Why do we call people who scam other people out of something a con man? 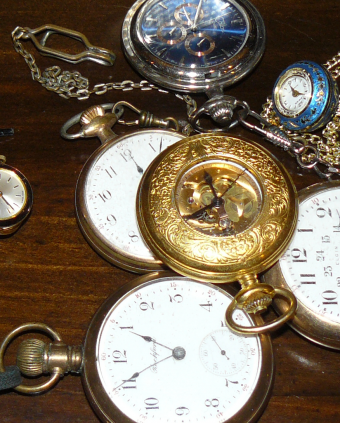 “Have you confidence in me to trust me with your watch until tomorrow?”

With these 13 words politely expressed, as often as not William Thompson would acquire another watch. Of course, Thompson wasn’t even close to the first to run such a daringly simple scheme, but his bold method of gaining his mark’s trust led a writer in the June 8, 1849 edition of the New York Herald to pen a piece “Arrest of the Confidence Man,” giving us the first known documented instance of the term “confidence man.”

Within a decade, Herman Melville published his novel The Confidence-Man, which further popularized the phrase. Over time, this has been shortened to the familiar “con man” or “conman” and the derivative “con artist.”

Schemes like Thompson’s have been around for seemingly as long as humans have had assets to swindle, with various names for the scammers popping up over the centuries. As for early-on in the United States, before Thompson, con men were commonly called diddlers, after a character, Jeremy Diddler, from the 1803 play Raising the Wind, by James Kenney.

Analyzed in depth by none other than Edgar Allan Poe in an 1840 essay, Diddling, Considered as One of the Exact Sciences, Poe noted the qualities necessary to succeed at diddling: audacity, minuteness (focusing on the small crime), self-interest, ingenuity, perseverance, impertinence, nonchalance, originality, and a grin.

Having his fair share of each of these, good manners and being well dressed, Thompson was remarkably successful with his scheme… that is, until he was finally caught, as described in the aforementioned 1849 edition of the New York Herald:

Arrest of the Confidence Man—For the last few months a man has been traveling about the city, known as the “Confidence Man,” that is, he would go up to a perfect stranger in the street, and being a man of genteel appearance, would easily command an interview. Upon this interview he would say after some little conversation, “have you confidence in me to trust me with your watch until to-morrow;” the stranger at this novel request, supposing him to be some old acquaintance not at that moment recollected, allows him to take the watch, thus placing “confidence” in the honesty of the stranger, who walks off laughing and the other supposing it to be a joke allows him so to do.

In this way many have been duped, and the last that we recollect was a Mr. Thomas McDonald, of No. 276 Madison street, who, on the 12th of May last, was met by this “Confidence Man” in William Street, who, in the manner as above described, took from him a gold lever watch valued at $110; and yesterday, singularly enough, Mr. McDonald was passing along Liberty street, when who should he meet but the “Confidence Man” who had stolen his watch.

Officer Swayse, of the Third Ward, being near at hand, took the accused into custody on the charge made by Mr. McDonald. The accused at first refused to go with the officer; but after finding the officer determined to take him, he walked along for a short distance, when he showed desperate fight, and it was not until the officer had tied his hands together that he was able to convey him to the police office. On the prisoner being taken before Justice McGrath, he was recognized as an old offender by the name of Wm. Thompson, and is said to be a graduate of the college at Sing Sing.

The magistrate committed him to prison for a further hearing. It will be well for all those persons who have been defrauded by the “Confidence Man” to call at the police court Tombs and take a view of him.