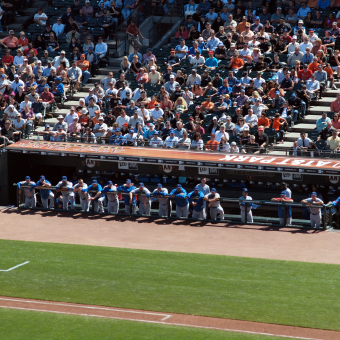 Imagine attending a game with no stadium seating where you have great tickets right near the action on the infield. The pitcher winds up, releases the ball, and as it speeds toward the batter, the runner on third makes an attempt to steal home. When the ball and the runner are halfway to home base you lose sight of them both. You hear half the crowd groan, while the other half cheers, but you don’t know why. Was it a ball? A strike? Was the runner safe at home? Did he slide? Did the catcher miss the pitch or catch it successfully and tag the runner out? You simply Do. Not. Know! This could’ve all been avoided if the dugout was below ground rather than blocking your view of home plate.

And there you have it, the number one reason why dugouts are traditionally built below field level–so spectators near the infield can have an unobstructed view of the game, especially the action at home plate. In the days before giant ballparks with their massive stadium seating, this was even more important than it is today. Not surprisingly from this, around the late 19th century when rules were put in place specifying the area the players hung out at was required to have a roof, side and back walls, digging that area out to keep the structures from blocking fans’ views of the game became a thing.

These “dugouts” also provide protection to players from taunting and unruly fans. In the early days of baseball, players sprawled on the grass along each baseline with the fans right behind them. This provided fans with easy access to those athletes… Too easy. If spectators didn’t like what was going on, they could scream directly behind the players and also weren’t opposed to chucking objects at them. Dugouts with walls and a roof, located below ground, provide much needed separation, as well as protection from the elements.

As a bit of a side bonus, foul balls, which were formerly a bit of a problem to players lounging along the foul lines, were no longer an issue. With the below ground digs, often with a protective railing to lean against while watching the game, players can easily duck down if a ball is rocketing their way.