This Day in History: July 27th- A Wild Hare 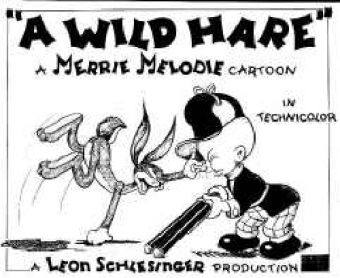 On July 27, 1940, a legendary, world-renowned rabbit was born in Brooklyn, New York. (Actually, he was born in Hollywood, but you’d never know it from the accent.) He’s the wise-cracking, street-smart, self-assured star of the screen, Bugs Bunny. But he didn’t just appear out of nowhere.

The bunny that became Bugs was a group effort by a bunch of cartoonists at Warner Brothers studios in the late 1930s. The earliest version of Bugs was drawn by animator Ben “Bugs” Hardaway and was seen in the 1938 black and white cartoon “Porky’s Hare Hunt.” The simply drawn character was a super-hyper combination of Woody Woodpecker and Donald Duck.

Friz Freleng, Tex Avery, and Chuck Jones continued to work out the kinks in the still- unnamed character’s persona, and Mel Blanc provided him with his now-legendary Brooklynese delivery. By the time “A Wild Hare” was released on July 27, 1940, they had it down pat (although poor Bugs was still without a name). Producer Leon Schlesinger was immediately sold on the new character and called for more cartoons starring the gregarious and witty rabbit.

The plot line for “A Wild Hare” is a now iconic one. It centers on the mighty hunter Elmer Fudd in hot pursuit of our hero. This cartoon is the first time we hear the catchphrases that have now become part of our shared cultural heritage: “Be vewy, vewy quiet, I’m hunting wabbits!” and “Eh, what’s up, Doc?”

Bugs got his famous carrot-chewing stance from another famous screen idol of the day – Clark Gable. As Chuck Jones, Fritz Freleng, and Bob Clampett all remembered, the carrot twirling and munching was based on Gable’s character Peter Warne leaning against a fence eating carrots faster than he could swallow them while talking to Claudette Colbert (or Ellie Andrews) in the comedy classic “It Happened One Night”. This scene was so familiar to contemporary audiences that everyone immediately made the connection.

Tex Avery added the “What’s up, Doc?” line pretty much as a throw-away phrase; it was simply a common expression in his home state of Texas at the time. But when the short aired, the sight of Bugs nonchalantly chomping on his carrot and inquiring, “What’s up Doc?” was so far removed from the audience’s expectations of what a rabbit would do when confronted by a hunter that it brought the proverbial house down. And so, the gag stayed, and was a part of virtually every Bugs Bunny cartoon thereafter.

Bugs Bunny has been one of America’s most consistently popular cartoon characters for 75 years. He has starred in feature-length films, prime-time television specials, and over 175 animated shorts. What makes his appeal so enduring?

Unlike many cartoon characters, Bugs Bunny is multi-dimensional. He has a well-developed personality, which makes him more interesting and engaging than other animated characters. He doesn’t back down from confrontation, which was a novel concept in the world of animation until Bugs came along.

As the Looney Tunes website explains: “The gregarious but truly lovable Bugs Bunny always wins, no matter who he’s battling, and no matter what the situation. No bully is too big, no hypocrite safe, no pompous adversary so powerful, that Bugs can’t joyfully whittle him down to kindling wood.”

But the incomparable Mel Blanc, who gave Bugs his voice and personality for so many years, puts it best: “He’s a little stinker. That’s why people love him. He does what most people would like to do but don’t have the guts to do.”