What Are Goose Bumps?

May 7, 2015 Melissa
Justin R. asks: What is going on in our skin to create goose bumps? 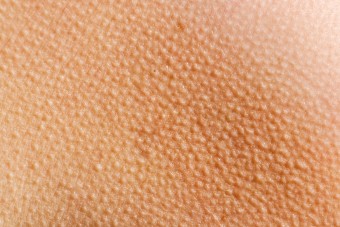 A holdover from an earlier stage in our evolution, goose bumps are a function of the autonomic nervous system reacting to a primal threat.

Technically, the phenomenon is called the pilomotor reflex, and occurs when the arrector pili muscle, which runs between the base of a hair follicle and the outer layer of skin, contracts.

In the absence of cold or danger, the hair extending from the follicle comes out at a shallow angle, such that it rests (or nearly so) against the skin. When stress is encountered (either cold temperatures, a threat, or a time where your emotions are going a little haywire, such as when walking down the aisle during your wedding), messages are sent through the nervous system to nerve endings that trigger the arrector pili muscles. These in turn contract, pulling the bulb of the hair follicle toward it, and the adjacent outer layer of skin; this results not only in the characteristic bump on the surface of the skin, bu 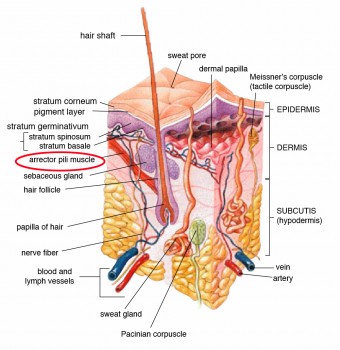 t causes the hair to stand on end.

Note how, for an animal living a more primitive existence than the modern human, this would be a benefit. As the hair stands on end, if as a result of cold, it provides more insulation to the body below by trapping a thicker layer of air between your skin and the elements – ameliorating the problem. Likewise, if the hair stands on end as the result of a threat, the puffed up hair makes the animal appear larger and more threatening, and thus helps ward off potential attackers.

Of course, a variety of animals experience this involuntary reaction, and for those of us who own a tom cat who lives outside, it’s not uncommon to see them become remarkably bushy if stuck out there in the cold rain or when faced with an aggressive foe.

Obviously, humans no longer need this reaction as our clothing and weapons satisfy these needs, and we really don’t have all that much hair anymore to make this physiological response useful… well, most of us, anyway; as such, at least for these purposes, goose bumps are considered a vestigial trait.

And if you’re curious as to why this physiological response is called by this particular name, the word, goosebumps, dates back to 1859 and was coined due to the similarity between human skin in the midst of an attack and that of the skin of a freshly plucked goose. Earlier iterations of this same idea were known as goose-flesh from the early 1800s and goose-skin or goose’s skin from the late 1700s.