April 13, 2015 Sarah Stone
Julia G. asks: Why do gas stations get to set their prices ending at 9/10ths of a cent, but nothing else is priced that way? 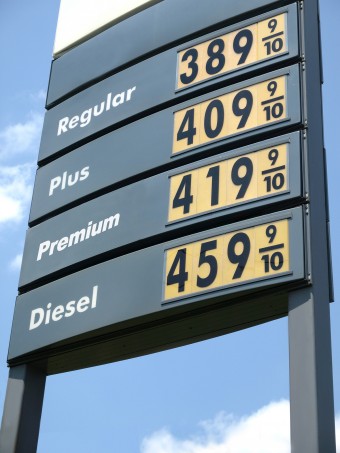 The practice of pricing fuel with a fraction of a penny is thought to have started around the 1930s.  While we can’t be sure who was the first to price fuel this way, it seems to have become relatively commonplace across the United States all the sudden around the same time. So what happened? In short- taxes and the Great Depression.

The United States Congress first implemented a $0.01 gas tax in 1932 as a temporary measure, putting that money towards reducing deficits acquired due to the Great Depression. The tax was supposed to expire in 1934, but, as so often happens, Congress voted to extend the tax and raise it by half a cent instead. The tax now sat at $0.015 per gallon of gas.

Around this same time, gas station owners began breaking down the price of a gallon of gas by fractions of a cent, leading to the generally accepted theory that it was the fraction of a cent tax that resulted in gas station owners almost universally beginning to price their gas this way.

While a fraction of a cent is decidedly inconsequential today, at least as far as an individual consumer is concerned, when this practice began, gas cost around $0.10 per gallon (about $1.75 today); so the change of the price by even a fraction of a cent was significant in terms of getting people to come to your fuel station instead of a competitors. Rounding up or down by a full cent (which would be about an 18 cent swing per gallon in today’s money) also greatly affected the bottom-line of the particular fuel station.

Today, federal gas taxes continue to add up to fractions of a penny. For instance, according to the U.S. Energy Information Administration, in 2014, the federal gas tax was $0.184 per gallon while the average state gas tax was $0.2412 per gallon. But given that a difference of a penny per gallon isn’t going to greatly affect the ultimate price of refueling your vehicle, you might be wondering why fuel station owners don’t simply round up or down on the price of a gallon of fuel now-a-days.

As for the rounding down, while it’s insignificant to the individual consumer, that 9/10th of a penny per gallon does add up to quite a bit in the grand scheme of things, which is particularly significant as many fuel stations make very little off the fuel itself, sometimes even just a few cents per gallon; most of their profits come from the convenience store side of the business. Offering fuel is just a way to get people in the door. As for how much that 9/10th’s of a cent per gallon adds up to, in 2014, the fuel industry as a whole in the United States brought home an additional $1.2 billion with that 9/10th’s of a penny rather than rounding down to the nearest cent.

As to why they don’t round up, the answer lies in marketing. As silly as it seems when you stop and think about it for a second, that fraction of a penny does make a measurable difference in consumer behavior.

You see, pricing gas by the 9/10ths of a cent works a lot like when other stores sell items for prices ending with “.99”. Shoppers place much greater emphasis on the first number in a price and tend to ignore the least significant digits. So a price tag of $4.99 ends up seeming a lot cheaper than $5.00, even though people paying in cash often readily throw away that one penny they saved.  For instance, researchers in France recently noted that, in their study, when they lowered the price of a pizza from 8 euros to 7.99, sales of that pizza increased 15%.

In the same way, when fueling up, customers only typically pay attention to the first three digits of the price. A price of $2.29 and 9/10ths gives the individual the impression that they are only paying $2.29 per gallon when they are essentially paying $2.30- two insignificantly different prices that nonetheless make a world of difference when a customer is picking a gas station to fuel up at. This allows the fuel stations to take advantage of the power of pricing things ending with a “9”, while effectively collecting the next penny up amount.

In the end, each one of those 9/10th of a cent per gallon gets tallied up with the ultimate result often including a fraction of a penny. While you might be tempted to think in these circumstances that the total will always round up to the nearest cent, according to the executive director of the National Conference of Weights and Measures, Don Onwiler, this isn’t the case and his inspectors have never come across a gas pump that always rounds up. As he stated, “The dispensers will always round to the nearest whole cent… In some cases, that means rounding up. In some cases, it means rounding down.”