The Invention of the Cardboard Box 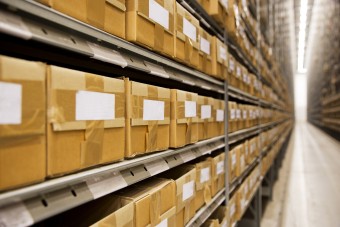 The cardboard box goes largely unappreciated. Yet, it is indispensable to our daily living. It holds all of our knick-knacks and personal mementos when we move or have things shipped. It holds our breakfast cereal. It has been used for countless children’s art projects; fashioned into a robot head or a horse’s body. Heck, it is even in the International Toy Hall of Fame in Rochester, New York. As with a lot of things that have become commonplace, hardly any thought has been put into how and why it is was invented and by whom. In fact, the history of the cardboard box, besides rarely being talked about, isn’t particularly well documented either. However, cobbled together through several sources,  patents, and old forgotten texts, we can start to piece together the story of the ubiquitous cardboard box.

It seems the beginnings of cardboard dates back to China, about three or four thousand years ago. During the first and second century B.C., the Chinese of the Han Dynasty would use sheets of treated Mulberry tree bark (the name used for many trees in the genus Moras) to wrap and preserve foods. This fact is unsurprising considering the Chinese are credited with the invention of paper during the Han Dynasty, perhaps even around the same time (the earliest paper ever discovered was an inscription of a map found at Fangmatan in the Gansu province).

Paper, printing, and cardboard slowly made its way west thanks to the silk road and trade among the empires of Europe and China. While cardboard likely ended up in Europe much earlier than the 17th century, the first mention of it comes from a printing manual entitled Mechanick Exercises, which was written by Theodore Low De Vinne (well-known scholarly author of typography) and Joseph Mixon (a printer of math books and maps, while also believing, rather bizarrely, that the Arctic was devoid of ice because there was sunlight there 24 hours a day). In the manual, it reads:

Scabbord is an old spelling of scabbard or scale-board, which was once a thin strip or scale of sawed wood…. The scabbards mentioned in printers’ grammars of the last century were of cardboard or millboard.

Through this description, it is inferred that cardboard was used as printing material and to be written on, rather than in box form and for storage.

The first documented instance a cardboard box being used was in 1817 for a German board game called “The Game of Besieging,” a popular war strategy game. Some point to an English industrialist named Malcolm Thornhill being the first to make a single-sheet cardboard box, but there is scant evidence of who he was or what he stored in the cardboard box. It would be another forty years before another innovation rocked the cardboard world.

In 1856, Edward Allen and Edward Healey were in the business of selling tall hats. They wanted a material that could act as a linear and keep the shape of the hat, while providing warmth and give. So, they invented corrugated (or pleated) paper. Corrugated paper is a material typically made with unbleached wood fibers with a fluted sheet attached to one or two linear boards. They apparently patented it in England that same year, though English patents from prior 1890 are notoriously difficult to find and most have yet to be digitized, so we weren’t able to read over the patent as we normally would while researching.

Who knows if Albert Jones of New York ever encountered an Allen/Healey tall English hat, but the next fold in the cardboard story belongs to Mr. Jones. In December of 1871, Albert Jones was awarded a patent in the United States for “improvement in paper for packing.” In the patent, he describes a new way of packing that provides easier transportation and prevents breakage of bottles and vials. Says the patent,

The object of this invention is to provide means for securely packing vials and bottles with a single thickness of the packing material between the surface of the article packed; and it consists in paper, card-board, or other suitable material, which is corrugated, crimped, or bossed, so as to present an elastic surface… a protection to the vial, and more effective to prevent breaking than many thicknesses of the same material would be if in a smooth state like ordinary packing-paper.

The patent goes on to make clear that this new packing method isn’t just relegated to vials and bottles, pointing out it could be used for other items, as well as not limited “to any particular material or substance, as there are many substances besides paper or pasteboard which can be corrugated for this purpose.”

A few years after this, the cardboard box that we know and love finally, quite literally, took shape. The Scottish-born Robert Gair owned a paper bag factory in Brooklyn. In 1879, a pressman at his factory didn’t see that the press rule was too high and it reportedly cut through thousands of small seed bags, instead of creasing them, ruining them all before production was stopped and the problem fixed.

Gair looked at this and realized if sharp cutting blades were set a tad higher than creasing blades, they could crease and cut in the same step on the press. While this may seem like an obvious thing, it’s not something any package maker had thought of before. Switching to cardboard, instead of paper, this would revolutionize the making of foldable cardboard boxes. You see, in the old way, to make a single sheet folding box, box makers would first score the sheets using a press, then make the necessary cuts with a guillotine knife by hand.  Needless to say, this made mass producing foldable boxes prohibitively expensive.

In Gair’s new process, he simply made dies for his press such that the cutting and creasing were accomplished all in one step. With this modification, he was able to cut about 750 sheets in an hour on his press, producing about the same amount in two and a half hours on one single press as his entire factory used to be capable of producing in a day. 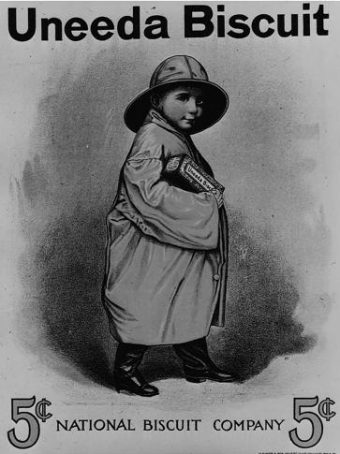 At first, Gair’s mass-produced foldable boxes were mostly used for small items, like tea, tobacco, toothpaste, and cosmetics. In fact, some of Gair’s first clients were the Great Atlantic & Pacific Tea Company, Colgate, Ponds, and tobacco manufacturer P. Lorillard. However, in 1896, Gair got his biggest client yet for his pre-cut, pre-creased cardboard box – the National Biscuit Company, or Nabisco, with a two million unit order. With this leap in product packaging, now customers could purchase pre-portioned crackers in a wax-paper lined box that kept the crackers fresh and unbroken. Before this, when buying these crackers, they’d have a store clerk get them from a less moisture and vermin controlled cracker barrel.

From here, sales of such boxes exploded and by the turn of the century, the cardboard box was here to stay. So next time you are loading your closet with cardboard boxes full of old clothes, buying something off of Amazon, or just opening a box of saltine crackers, you can thank a German board game for first commercially using a cardboard box and one of Robert Gair’s employees slipping up, inspiring a small but momentous tweak that made mass-produced, foldable cardboard boxes possible.