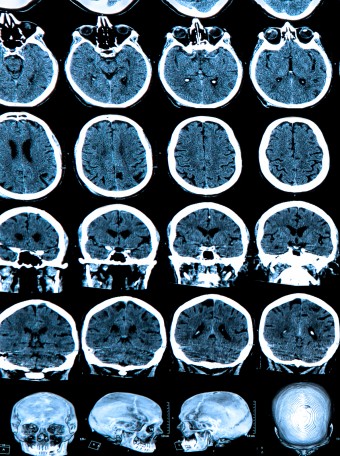 Immobile and silent, those who suffer from the severest forms of akinetic mutism either lack the ability or the will to move or to speak. Caused by any of a number of conditions, diseases and injuries, under certain circumstances the disorder can be treated. One of the most remarkable stories of recovery from this devastating condition happened in 1941, when an Australian-born, Oxford neurosurgeon manhandled a brain cyst and restored a 14-year-old girl to an active life.

Obviously neurological in nature, the disorder is similar to locked-in syndrome, although with akinetic mutism, while the lights are on (the eyes are open and sometimes track movement), there doesn’t appear to be anybody home (evidence of consciousness is minimal at best).

Known causes of the condition include an injury to the frontal lobe, certain types of strokes, encephalitis lethargica, hydrocephalus, Creutzfeldt-Jakob Disease, some aneurysms and tumors, and, notably for this story, a cyst in the third ventricle.

The brain is protected and supplied with cerebral spinal fluid by its ventricular system (comprised of four cavities). One of these cavities, the third ventricle, lies deep within the brain in between the two halves of the thalamus, a portion of the brain involved in transmitting both motor and sensory signals, and that plays a part in the regulation of sleep, consciousness and alertness.

In 1941, Hugh Cairns, a neurosurgery pioneer who had already made a name for himself when he convinced the British Army to make motorcycle helmets mandatory, developed an interest in akinetic mutism, and in particular, the case of Elsie Nicks.

Her entire life, Elsie had suffered from such awful headaches that they had to be treated with morphine. As she entered adolescence, Elsie began to display a series of increasingly odd, and serious, symptoms including drowsiness, apathy, the frequently the appearance of being awake without any conscious awareness, and only occasionally speaking – and that limited to rare “whispered monosyllables.”

Knowing Elsie suffered from a craniopharyngiomatous cyst that was pressing on the posterior medial-ventral surface of her frontal lobe, as well as the walls of the third ventricle, Cairns proposed to ease the pressure by draining the cyst. After the first procedure, Elsie improved for a while and, interestingly, had no memory of her lapse. Unfortunately, as the cyst filled again, her symptoms returned. The draining procedure was repeated twice, and each time, she improved, and then relapsed into her former state of appearing awake, but with minimal consciousness.

Hoping for a more permanent solution, Cairns removed the cyst. Although Elsie showed little improvement immediately after the surgery, within 8 months, she no longer suffered from headaches nor had any symptoms of mutism. Many others with akinetic mutism, of course, are not so lucky.