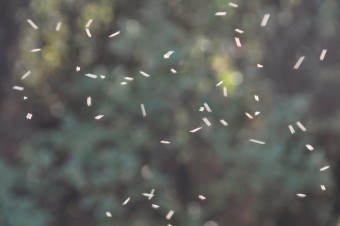 A common sight in the spring and summer, the seemingly unprofitable and pointless habit of gnats to hover in a cloud is, in fact, the single most productive thing they’ll ever do with their short lives.

Although there are a wide variety of non-biting, but eminently annoying, gnats and midges, their lifecycles are all pretty similar. Each begins as an egg, and, with some species, they lay thousands at a time.

When they hatch (after a period of no more than a week), each enters a larval stage (lasting anywhere from 10 days to 7 weeks), followed by a pupae stage that lasts another 3 to 20 days, and then each emerges as an adult. And this is when they swarm.

Fulfilling their biological imperative, gnats and midges (like many other insects) swarm in order to reproduce. When the moment is right, females take flight while secreting a sex hormone that attracts the males, who (like those from many species) can catch the scent even from a distance. The males seek out the female, swarming around her, trying to be “the guy,” and, in the process, forming into the well-known ball. Yes, that ball of gnats you accidentally walked through was simply a group of insects trying to get it on.

Shortly after mating (and subsequent egg-laying), the lovers die.

Experts note that many insect species swarm, including colony-living insects, and many believe this is to promote genetic mixing. Members of different colonies are able to time-up their swarming by following environmental cues such as temperature, daylight, humidity and wind speed (high winds can be bad for business).

In addition to continuation of the species, scientists have discovered that the health of many breeds of social insects depends upon their proximity to their packs. For example, Mormon crickets rely on their groups for safety, and in a 2005 experiment (where some individuals were separated from the group and set loose on their own) within two days, 50-60% of the loners were dead – compared with 0 deaths among those who remained with the pack.

Beyond survival, pack proximity also seems to play an important role in the development of some species. In a 2012 report, it was revealed that cockroaches, like misery, love company, and when left alone, they can suffer from a variety of maladies including delays in molting and difficulties with mating.

Cockroaches also enjoy communicating with each other, and they sometimes do it with their poo. Exuding chemicals called cuticular hydrocarbons, they often mix these with their feces to leave a “scent trail” for their compatriots to follow back to a food source [think about that the next time you see a cockroach on the kitchen counter]. These chemicals also help individuals identify fellow members of their bands, so they can distinguish their pack’s poopy trails from all of the others.