This Day in History: February 2nd 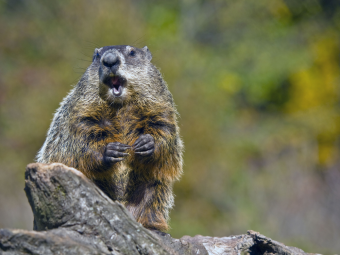 For as the sun shines on Candlemas Day,
So far will the snow swirl until the May.

On February 2, 1887, the first official Groundhog Day featuring a rodent meteorologist at Gobbler’s Knob in Punxsutawney, Pennsylvania occurred. According to long-standing tradition, if on this day a groundhog pops out of his hole and sees his shadow, there will be six more weeks of wintry weather. If he doesn’t, it means you can plan on an early spring.

Groundhog Day harkens back to a time when we lived in closer harmony with the earth and the cycles of the seasons. Many cultures observed some sort of holiday at the beginning of February. The ancient Celts celebrated Imbolc, which morphed into Candlemas as the Christians rose to dominance. This is the midpoint of winter, a time of purification and the first stirrings of new life.

The first European settlers in Pennsylvania came from Germany, and they brought with them the tradition of using a pretty unremarkable animal, the hedgehog, to predict the weather at Candlemas. Since there was a dearth of hedgehogs in the New World, they made do with the groundhog.

But why are groundhogs emerging from their nice warm burrows in the dead of winter in the first place? Groundhogs, or woodchucks, hibernate in late fall. In early February, male groundhogs emerge from their burrows – but it’s not to give humans a head’s up on the long-term forecast; it’s to look for a lady-friend. Once they’ve scratched the itch, they head back underground until March.

On February 2, 1886, the first Groundhog Day at Punxsutawney, Pennsylvania occurred. This was reportedly decided by proclamation from the town’s newspaper editor Clymer Freas, who informed his readers: “Today is groundhog day and up to the time of going to press the beast has not seen its shadow.”

As mentioned, the following year, the first trip to Gobbler’s Knob for Groundhog Day was undertaken by a group who dubbed themselves the ‘The Punxsutawney Groundhog Club.” Freas, de facto leader of the group, declared Phil (I guess they were on a first name basis) the official Punxsutawney Groundhog, and the only one with meteorological super powers.

Every year, the crowds turning out to see what Phil’s verdict would be grew and grew. Much later, news media from around the world began to report the results. Other towns began staging their own Ground Hog Day celebrations, complete with weather predicting rodents. But Phil remained the biggest star, drawing crowds in the tens of thousands, especially after the release of the movie “Groundhog Day” in 1993. All because a hibernating rodent wakes up in the middle of his winter’s nap looking to get lucky.

You might be wondering at this point just how accurate these rodents are at predicting weather using the “shadow” tradition. Turns out, not very… The many incarnations of Punxsutawney Phil (groundhogs only live about 3-6 years in the wild and 10-14 in captivity) has only been accurate about 39% of the time. According to a Canadian study looking at 13 different cities’ groundhogs used for their respective festivals, the net accuracy was only 37%. So we’d do better flipping a coin, but hard to build a party around that, I guess.