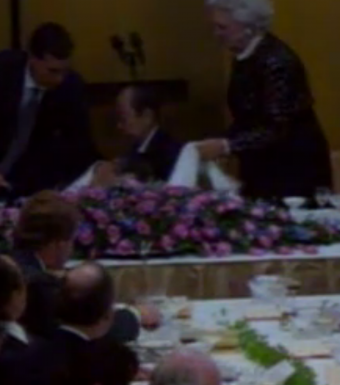 Taking the job as President of the United States means that people across the world know just about everything you do or say, including occasionally making a fool of yourself. Former President George W. Bush understood that when he choked on a pretzel while watching a football game, and President Barack Obama knew that the whole world would find out that he needed stitches after getting elbowed in the face during a basketball game. But former President George H. W. Bush had the unfortunate luck of having his embarrassing moment broadcast on national television in Japan, giving rise to the term “Bushu-suru.”

So what happened? Then President Bush was attending a dinner at the home of the Japanese Prime Minister Kiichi Miyazawa on January 8, 1992. The dinner took place during a trip to Asia where the stopover in Japan occurred with the intention of improving the relationship between the two countries. Bush admitted the next day during an interview with reporters that he had not been feeling well before the dinner.

At a certain point in the evening, he later said, “I turned to the Prime Minister and said, ‘Will you please excuse me?’ and I rushed to the men’s room. And I thought that had taken care of it.”

During his absence in the restroom, he reportedly vomited and, according to a report from ABC News shortly after the event, also had to change soiled undergarments.

He returned in time to attend the dinner that was being filmed for broadcast on both Japanese and American television. At about 8:20 PM, Bush began to feel very ill. He slumped over in his chair and then pulled what would be known as a Bushu-suru- vomiting over himself and onto Prime Minister Miyazawa.

There he lay, with his head in Miyazawa’s lap, initially seemingly unconscious, before Mrs. Bush and the Secret Service helped him to the floor. Eventually, the Secret Service helped him to his feet, at which point he apologized to Miyazawa, and was escorted from the building. The White House Press Secretary called the incident a bout of intestinal flu.

Unfortunately for Mr. Bush, the television camera had been recording. The video of him becoming sick all over the Japanese Prime Minister was played over and over on Japanese television that night. American comedians also took advantage of the incident. Dana Carvey on “Saturday Night Live” parodied the incident while it was also featured on “The Simpsons.” In Japan, the phrase “Bushu-suru” was coined. It translated to “to do the Bush” and figuratively meant someone throwing up in public. However, like most instances of slang, the term has since fallen into disuse.