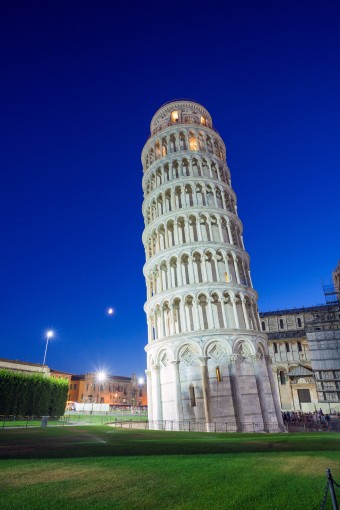 The Cathedral in Pisa’s free-standing bell tower obviously wasn’t intended to be lopsided. When construction began in August of 1173, everything seemed OK at first. But the builders set the tower on a too-small foundation in unstable, weak soil. By the time construction had reached the third floor in 1178, the structure had begun to sink.

Efforts were made to correct the problem by putting longer and heavier pillars on the north side in the hopes of making it straight again. Unfortunately, it looked rather like a droopy, stone banana instead. It was left as it was for a few hundred years while wise guys through the ages no doubt pretended to prop up the tower to make their buddies laugh.

But this eventually became too much of a good thing.  You see, the tower has been slowly falling throughout its entire existence. Researchers estimate that every 20 years the top of the Leaning Tower of Pisa gains an inch in the wrong direction. It had been calculated that an angle of 5.44 degrees would be enough to trigger a collapse, but this was proven wrong in 1990 when the tower reached an angle of 5.5 degrees. This caused the Leaning Tower of Pisa to be shut down on January 7, 1990 to avoid a tragedy if the structure finally succumbed with hundreds of tourists inside.

Engineers from around the globe spent the next several years carefully crafting a plan to restore the 800-year-old bell tower, and starting in 1998, these plans were put into action. The basic plan involved weighing down the tower’s north side while soil was removed from beneath it, which placed the structure closer to its desired position. This adjustment brought the leaning Tower of Pisa’s angle to a less risky 3.99 degrees. Experts believe this buys the tower, and Pisa’s tourist trade, another two centuries before further restoration becomes an issue.