This Day in History: January 23rd- The Pluto Platter 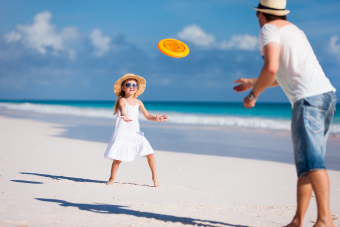 On January 23, 1957 the Wham-O toy company rolled out their very first batch of plastic aerodynamic flying discs – now known the world over as Frisbees. Since that day, the landscape of college campuses, parks and beaches have never been the same.

The story of the Frisbee began on a Santa Monica, CA beach in 1938. A guy named Fred Morrison and his future wife Lucile were offered a quarter for a cake pan they were throwing back and forth to one another. Fred recalled in 2007, “That got the wheels turning, because you could buy a cake pan for 5 cents, and if people on the beach were willing to pay a quarter for it, well, there was a business.” Clearly.

Before long, Fred and Lucile were on the beach selling cake pans for 25 cents a pop. Their venture was interrupted when Fred went to serve in World War II, but after his return, he started sketching aerodynamically improved designs for a flying disc he dubbed the Whirlo-Way.

By 1948, Morrison and his business partner Warren Franscioni started production of the first plastic flying discs, calling them “Flyin-Saucers” to cash in on the UFO craze that was happening at the time. The two worked the fair circuit demonstrating their product, and enthusiasm for the “Flyin-Saucer” continued to grow.

Morrison and Franscioni parted ways by 1950 and Morrison started his own company, American Trends, in 1954. He began selling the newest version of his flying discs, the Pluto Platter, which was by then being made of flexible polypropylene plastic.

Wham-O bought the rights to Morrison’s product on January 23, 1957. That June, the company’s co-founder Richard Knerr gave the Pluto Platters the additional name of “Frisbee” when he heard that’s what the kids over at Northwestern were calling it.

At first, Morrison thought the new moniker was “horror, terrible.” But in 1982 after $2 million (about $4.7 million today) in royalty payments, he changed his tune considerably: “I wouldn’t change the name of it for the world.”

But the guy who really deserves the credit for Frisbee’s massive popularity is Edward “Steady Ed” Headrick, who was brought on as Wham-O’s general manager in 1964. Headrick redesigned the Frisbee by changing the rim’s thickness and emphasizing the raised ridges that stabilized the disk in flight – and legitimized “Frisbee” as a sport.

When Headrick died in 2002, he was cremated and his ashes were contained within memorial Frisbees given to his family and friends, and sold to benefit The Ed Headrick Memorial Museum.

I felt the Frisbee had some kind of a spirit involved. It’s not just like playing catch with a ball, it’s the beautiful flight… We used to say that Frisbee is really a religion – Frisbyterians we’d call ourselves. When we die, we don’t go to purgatory. We just land up on the roof and lay there.

And, indeed, one of those Frisbees with Headrick’s ashes embedded in it was thrown by his wife, Farina, onto the roof of the aforementioned Ed Headrick Memorial Museum, where it presumably remains to this day.