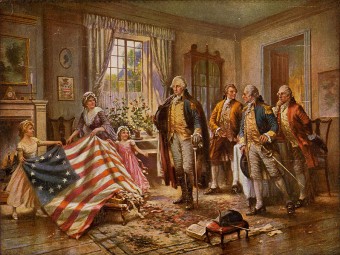 In the summer of 1776, the story goes that General George Washington paid a visit to a newly widowed seamstress regarding the design for their new nation’s flag. A basic lay-out using six-pointed stars had already been devised by the Continental Congress, but the seamstress supposedly pointed out that using five-pointed stars would be more efficient, as they could be folded and cut with a single snip. This woman’s name was Betsy Ross, and, while there is some controversy about it, she has gone down in history as the creator of the first American flag.

Betsy Ross was born as Elizabeth Griscom on January 1, 1752 in Philadelphia, PA to a family of Quakers. As a young girl, she was apprenticed to an upholsterer where she learned the valuable skills of sewing chair covers, mattresses, and window blinds. She fell in love with a fellow apprentice, John Ross. Since Ross was not a Quaker, they had to elope, and Betsy was shunned by her family and community.

The couple started their own upholstery business, but the Revolutionary War was revving up and John left to join the Pennsylvania Militia. He was killed in an accidental ammunition explosion and died in January of 1776. Betsy got married again in June of 1777 to a ship’s captain, Joseph Ashburn. He was taken prisoner by the British and died in England’s notorious Old Mill Prison in March of 1782. Thirty-year-old Betsy was now a two-time war widow.

Betsy learned of her second husband’s fate from an old friend, John Claypoole, who was also imprisoned at Old Mill. They eventually married, and lived together happily until John’s death in 1817. Betsy never married again, and died on January 30, 1836 at the age of 84.

As mentioned, there has been some controversy as to whether Betsy Ross was truly the creator of the American flag, because at the time the flag wasn’t revered like it is now, so no-one bothered to well-document the occasion. (A similar thing happened with the original Declaration of Independence, and even some of the signers got the date wrong later- nobody signed it on July 4th.) The only evidence that it was Betsy who created the first flag is the story that Betsy herself passed down to her children and grandchildren, who in turn shared with others.

It began in March of 1870, when Betsy’s grandson William Canby delivered a paper to the Pennsylvania Historical Society in which he proudly described his grandmother’s contribution to American history. Naysayers pointed out he was only 11 when Betsy passed away and that his recollections were likely flawed. To address that challenge, Betsy’s children came forward and signed sworn affidavits supporting his story and recollection of what Betsy had said.

Beyond the story, although there were no first person accounts, all of the men involved were known to Mrs. Ross. Colonel George Ross was her recently deceased husband’s uncle. Congressman Robert Morris and General George Washington were both members of the congregation of Christ Church, as was Betsy. In addition, Washington had employed her before. So Betsy being chosen for this particular job was not unlikely.

In the end, this and other bits of circumstantial evidence do seem to back up the claim that Betsy Ross created the first American flag, but barring better documentation, we’ll never be able to know for sure.