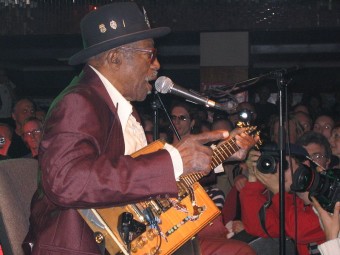 “I tell musicians, ‘Don’t trust nobody but your mama, And even then, look at her real good.’” – Bo Diddley

Rock and Roll trail blazer Bo Diddley’s signature 4/4 rhythm pattern, unique guitar playing, and larger-than-life personality makes him one of the most memorable founding fathers of modern popular music. He will forever be remembered for popularizing what is now known as the simple and funky Bo Diddley beat, immortalized in his namesake song “Bo Diddley”.

This African-based rhythm pattern (the infectious bomp-bomp-bomp bomp-bomp) has been a foundational mainstay of rock and roll music ever since Diddley helped popularize it in the 1950s. Buddy Holly used it on “Not Fade Away” (later covered by the Rolling Stones); it can also be heard on the Who’s “Magic Bus” and Bruce Springsteen’s “She’s the One”, just to name a few.

Born Ellas Bates on December 30, 1928 in McComb, Mississippi, Bo’s family moved to Chicago when he was seven years old. He first became interested in music through his local Baptist church, where he became part of the small orchestra there. The first instrument he played was the violin, but when he heard John Lee Hooker play, he picked up a guitar.

While still in high school, Bo formed a band called The Hipsters, and landed a regular gig at the 708 Club on the South side of Chicago. He subsequently signed a deal with Checker Records, a subsidiary of the larger Chess label in 1955, recording at the same time as Chuck Berry. His debut single was the two-sided classic “Bo Diddley”/ “I’m a Man”, the first of a long line of hits, including “”I’m Sorry”, “Crackin’ Up”, and “Road Runner”, that blurred the lines between Rhythm and Blues and Rock and Roll.

Besides all this, Diddley was highly inventive on and off the stage. He created his own tremelo effect and designed a rectangular “cigar box” style guitar in 1958. He also set up one the first-ever home recording studios, a practice that is commonplace in modern times but revolutionary in Bo’s.

Unlike many in the music business, Diddley did not abuse drugs or alcohol. However, he was not free from health issues in his later years, battling diabetes, but continued to release albums and perform live. Later, he suffered a stroke on May 13, 2007 after performing a show in Council Bluffs, Iowa. He was also hospitalized after he had a heart attack in August of 2007 in Gainesville, Florida. This legendary performer ultimately passed away on June 2, 2008 at the age of 79 of heart failure.