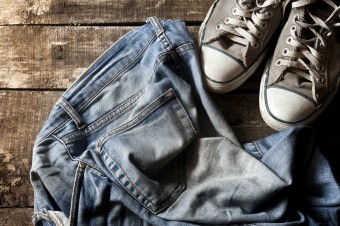 Jeans are easily one of the most ubiquitous pieces of clothing on Earth with millions of pairs being made, sold and wrapped around the butts of style conscious individuals every single day. But why are jeans so popular and for what purpose were they first made?

Before we answer that it’s important for us to first define exactly what we mean when we say “jeans” because the word has changed in context over the last few hundred years. As detailed by the Fashion Enyclopedia, the term “jeans” has existed since the 1600s, where it was used as a catch-all term to describe the “rough clothing worn by working men”. Since the fabric used to make these clothes often came from the Genoa region in Italy, it was commonly referred to as “jean”. Weavers from the Nimes area of France tried to replicate this fabric and it eventually came to be known as “denim” a bastardization of the words “de Nimes” (from Nimes). Cool, huh?

So what makes modern jeans so different from the work trousers found on the legs of 16th century workers? Well, the key difference is in how modern jeans are held together, rivets. If you’re currently wearing a pair of jeans, which is statistically quite likely, you may notice that they are held together at key points with small rivets. (You may also notice that your zipper has the letters “YKK” on it and if you’re interested in why, we covered that in another article). These rivets are a relatively new addition to jeans and they’re the reason for the garments legendary longevity.

Contrary to what you may have thought, unlike the stitch pattern often found on the rear pockets, the rivets aren’t just for show, they’re strategically placed at the locations the garments suffers the most strain, like the pockets and (sometimes) the zipper (hey-oh!). 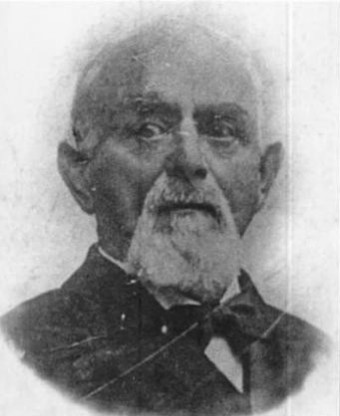 The idea to use metal rivets to reinforce the stitching of work trousers is the brainchild of one, Jacob Davis, a native Latvian who lived in Nevada as a salesmen during the 19th century. Davis earned his keep selling clothing and general supplies to the many miners and workers who called the area their home. The legend goes that the wife of a miner (some sources say a woodsman) came to Davis lamenting the fact that he often tore the pockets off of his work trousers and implored him to find a way to strengthen them. The legend continues that Davis drew inspiration from a horse’s saddle in his shop and hatched the ingenious idea to reinforce the pockets and other areas with metal rivets.

Annoyingly, the exact details surrounding the invention of the first pair of jeans as we’d understand them today will likely never be known, so we’re just left with the aforementioned legend. But it, at the least, seems plausible enough that Davis probably got the idea from a customer or customers who were having problems with torn pants, so he came up with a solution.

What we do know for sure though is that Davis’ “riveted work pants” were a huge hit with locals and that it only took a short while for demand to greatly outstrip the already meagre supply. Realising that he’d stumbled upon a goldmine potentially more lucrative than the actual goldmines his customers were working in, Davis understandably became very paranoid about someone stealing his idea and he sought to patent it. However, despite his short-term success, he simply didn’t have the scratch to do it himself, a whole $68 (about $1300 today). So, he reached out to the man whose name would eventually become synonymous with the product, Levi Strauss. 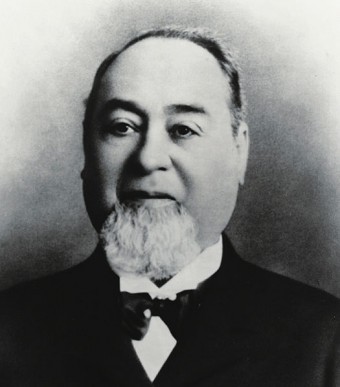 Strauss, similar to Davis, was a native European (originally hailing from Bavaria) who’d travelled to the states to try and make his fortune. The pair became acquaintances through Strauss’ dry goods store, which supplied Davis with the material he needed to make his riveted pants, among other product. After a brief and poorly spelled letter exchange (“The secratt of them Pents is the Rivits that I put in those Pockots… I cannot make them up fast enough…My nabors are getting yealouse of these success…”), the two men met and, with Strauss’ money, they were able to successfully apply for a patent on their riveted pants in 1873. That same year the pair began producing the pants on a mass scale.

Curiously, when the pair first began producing jeans, they sold two varieties, the blue denim kind you could find on the shelf of any clothing store today and a pair made from a fabric not dissimilar from canvas, known as “duck cotton” (often also used by Davis for making tents and wagon covers). The former proved to be wildly more popular than the latter and soon became the only kind the company sold.

The reason denim proved to be so much more popular than duck cotton is twofold. Firstly, denim becomes softer as it ages (unlike duck cotton that will pretty much always feel like you’re wearing a wagon cover), an attractive quality in a piece of clothing you’re expected to wear every day. And secondly, because it looked better. Denim jeans were originally dyed blue partially because indigo dye was cheap and readily available in large quantities in America, but also because the dye was dark enough to easily hide stains. Further, the dye in the small quantity needed per jean, combined with the weave of denim, wouldn’t seep through the denim to the other side. This meant the risk of the dye staining your legs is effectively nil, which is again, a desirable quality in a piece of clothing you’re going to be getting sweaty in on a daily basis.

The fact that the dye only stains the outside of denim jeans also means that as they age, they gradually fade as the dye is inevitably worn away. This proved to be another highly desirable quality of the garments that’s still popular today, with many even preferring to buy pre-faded versions.

So how did the world of riveted pants go from being the exclusive domain of the cowboy to the go-to fashion for everyone from sweaty hipsters to cool grandparents? Well, that’s down to a multitude of factors. The first, and probably biggest thing to happen to the world of riveted pants was the expiration of Levi’s patent in 1908, which gave dozens of imitators a chance to flood the market with knock-offs. The second thing was likely the romanization of the “cowboy lifestyle”. While the deeply entrenched association with manual laborers and rural people initially turned more affluent people off of the idea of wearing denim jeans, as time passed, the allure of wearing something so quintessentially American began to take hold, culminating in the “dude ranch craze” of the 1930s with people paying money to experience the “traditional” cowboy lifestyle, jeans and all.

A third thing that helped denim jeans become popular, particularly overseas, was their popularity with servicemen in the 1940s and 1950s, who often liked to wear them when they were off duty.

A fourth thing that made the garment popular with the younger generation was the release of films like Rebel Without a Cause and The Wild One, in which the protagonists wore jeans as a way of rebelling against societal expectations. After the release of these films in the 1950s, demand for jeans exploded amongst like-minded youths. This demand continued through the 1960s and 1970s where jeans were picked up by almost every youth counter-culture movement that sprung up. In the 1980s, interest in jeans went nuclear with the release of a series of sexually charged, strong armed ads like the infamous Brook Shields Calvin Klein ads or the decidedly more tame “laundrette ad” which saw sales of Levi’s increase by 800% in the UK.