This Day in History: September 8th 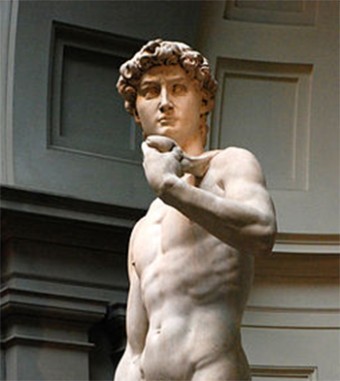 In every block of marble I see a statue as plain as though it stood before me, shaped and perfect in attitude and action. I have only to hew away the rough walls that imprison the lovely apparition to reveal it to the other eyes as mine see it.” – Michelangelo

On September 8, 1504, Michelangelo’s David, the world’s most recognizable sculpture and unrivaled masterpiece from an era famous for its artistic achievements, was unveiled in Florence, Italy on the plaza in front of town hall.

It was a long road to get there. Agostino di Duccio had been commissioned to build the statue in 1464 (before Michelangelo was a gleam in his daddy’s eye), but he passed the job over to Antonio Rossellini 12 years later. When Antonio Rossellino bailed in 1501 25-year-old Michelangelo Buonarroti accepted the gig, which turned out to be a good call because it’s now considered his greatest work.

Michelangelo, an adherent to the principle of disegno, believed that the statue of David already existed in the block of marble and that his job was to uncover it. He felt sculpture was the highest form of art because of its similarities to divine creation.

The proportions of David’s limbs are a bit out of whack – the upper body is noticeably larger than the lower half. While some pass this off as a stylistic choice, others claim that since the statue was originally supposed to be displayed on a high pedestal the proportions were adjusted accordingly to be viewed from below.

Michelangelo’s representation of David differs from past versions in one fundamental way. Unlike other artists’ renderings, Michelangelo’s David is portrayed just before his stand-off with Goliath, determined and poised for action.

The David and Goliath story had deep political meaning for the people of Florence at the time. The independent city/state was encircled by more powerful city/states and also had to contend with the conniving Medici family. The defense of civil liberties against these threatening outside forces made it very easy for the Florentines to relate to David’s struggles against the much more powerful Goliath. David was displayed prominently outside the Piazza della Signoria, and his symbolic significance wasn’t lost on anyone.

In 1783,the statue of David was moved to the Accademia Gallery in Florence as protection against the elements, and in 1910 a replica was put in its original location on the Piazza della Signoria.

Two million tourists make the trip to Florence every year to stand before this 500 year-old statue. Most of them aren’t even what you’d call art buffs. What is it that compels people from all over the world to go see a marble statue of some naked dude?

“In it may be seen most beautiful contours of legs, with attachments of limbs and slender outlines of flanks that are divine; nor has there ever been seen a pose so easy, or any grace to equal that in this work, or feet, hands and head so well in accord, one member with another, in harmony, design, and excellence of artistry. And, of a truth, whoever has seen this work need not trouble to see any other work executed in sculpture, either in our own or in other times, by no matter what craftsman.” – Vassari

Simple. It’s a beautiful work of art, and you don’t need a degree in art history to know that.