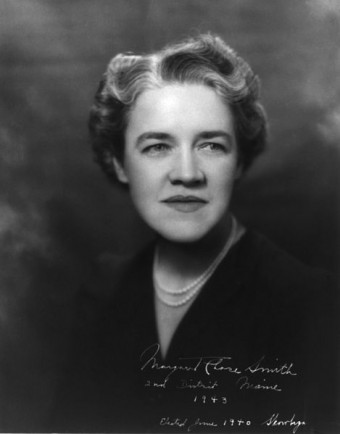 On January 27, 1964, then three-term Senator Margaret Chase Smith put the first crack in the “hardest, highest glass ceiling” when she announced her candidacy for the Republican nomination for President of the United States. Although she never really came close to winning it, Senator Smith’s presidential campaign helped dispel centuries of chauvinism and paved the way for female political leaders in the U.S. today.

Over the next decade, Margaret held several jobs including schoolteacher, business officer and treasurer. In 1922, she helped found the local chapter of the Business and Professional Women’s Club in Skowhegan and by 1926, she was president of the statewide group.

After she married Clyde Smith, a local politician, in 1930, Margaret developed political ambitions, and shortly thereafter, she was elected to the Maine Republican State Committee.

In 1937, Clyde Smith was elected to represent Maine’s second congressional district in the U.S. House of Representatives, and Margaret went with him to Washington, D.C., where she worked as his secretary, office manager and speechwriter.

Clyde suffered a fatal heart attack in the spring of 1940, but before he died, he encouraged Margaret to run for his seat in the next election. She won the special election unopposed, and shortly thereafter, the general election by a large margin.

Representative Chase Smith was reelected to the House in 1942, 1944 and 1946. During her tenure, as a member of the Naval Affairs Committee, she toured the South Pacific during World War II and was a strong supporter of women in the military. She also served as the chair of the Subcommittee on Hospitalization and Medicine and used that clout to pass the Women’s Armed Services Integration Act in 1948.

She also broke ranks with her Republican colleagues from time to time, and opposed the strike- and union- busting Smith-Connally Act in 1943.

Unlike her position in the House, which she first obtained, at least in part, from her husband’s passing, Margaret’s ascension to the Senate was entirely her own doing.

Facing entrenched Republican Party favorites in the primary, and having very little campaign money, Margaret ran on her Washington D.C. experience with the slogan “Don’t change a record for a promise.”

During the campaign, some questioned whether a woman had the right qualities to be a Senator, to which Representative Chase Smith replied: “Women administer the home . . . They set the rules, enforce them, mete out justice for violations. Thus, like Congress they legislate . . . . It is an ideal experience for politics.”

Margaret won that Republican primary and went on to defeat her Democratic opponent in the general election by a wide margin. By winning the Senate seat, she became the first woman to serve in both the House and the Senate.

On June 1, 1950, in response to the calumny being spread by Senator Joseph McCarthy, the fear it engendered and the deleterious effect it had on freedom of speech, Senator Chase Smith delivered a courageous address from the Senate floor, describing the then-current situation as:

A national feeling of fear and frustration that could result in national suicide . . . . Freedom of speech is not what it used to be in America. It has been so abused by some that it is not exercised by others.

The speech ended with a Declaration of Conscience that decried the “selfish political exploitation of fear, bigotry, ignorance, and intolerance,” being practiced by a few of her fellow Republicans (including McCarthy). Several other Republican senators joined her declaration, and later, Senator McCarthy would refer to them collectively as Snow White and the Six Dwarfs.

However, many others were impressed with the speech, including individual citizens, newspaper editorial boards, civic organizations and even President Harry Truman, who referred to the Declaration as “one of the finest things that has happened . . . in Washington in all my years . . . .”

Senator Chase Smith easily won reelection in 1954, 1960 and 1966. Notably, in the 1960 general election, the Senator defeated Lucia Cormier, making their 1960 run the first all-female campaign for a Senate seat in American history.

In 1950, she was commissioned as a lieutenant colonel in the Air Force Reserve, a post she served through 1958.

As a member of the Senate Armed Services Committee, Senator Chase Smith was a hawk, advocating for the use of nuclear weapons against the Soviet Union and supporting the Vietnam War. She was also a strong supporter of education, civil rights, Medicare and the space program, the latter of which, contrary to popular belief, was not supported by the majority of American citizens.  In fact, according to Smithsonian space historian Roger Launius, during the early days of the Apollo missions, the U.S. space program was one of the top government programs Americans listed that they thought should be dropped, with a full 60% of Americans feeling that the U.S. was spending too much money on space flight.

As for her bid to become the first female presidential candidate from a major party (Victoria Woodhull was the first overall almost a century before, but had no previous political experience and created her own party for the election, though nevertheless was an extremely remarkable woman in her own right), Senator Chase Smith struggled with the decision to enter the 1964 campaign for the Republican nomination for President, but ultimately decided to run, noting, “I have few illusions and no money, but I’m staying to the finish.”

During her speech to the Women’s National Press Club in Washington D.C. on January 24, 1964, she stated she decided to run for several reasons, including that she had the most experience of any candidate, many wanted her independent voice in the campaign and “to destroy any political bigotry against women by: “Pioneering the way for a woman in the future to make her more acceptable, to make the way easier for her to be elected President of the United States.”

Nonetheless, Senator Smith’s lack of staff, funding and political backing led to a generally poor showing in the primaries, although she surprised everyone by taking 25% of the votes in Illinois. At the Republican Convention, her name was put in for nomination, and she received 27 delegates. She refused to relinquish her delegates, and as a result, she took second in the balloting, losing to Barry Goldwater by a wide margin. (Goldwater would ultimately lose the presidential election by a landslide to Lyndon B. Johnson.)

After losing the 1972 Senate election, Margaret toured the country, lecturing at various colleges and universities for the Woodrow Wilson National Fellowship Foundation. She later returned to Skowhegan where she installed the Margaret Chase Smith Library Center.

Senator Chase Smith received the Presidential Medal of Freedom from President George H.W. Bush in 1989, and she died on May 29, 1995.