This Day in History: June 16th 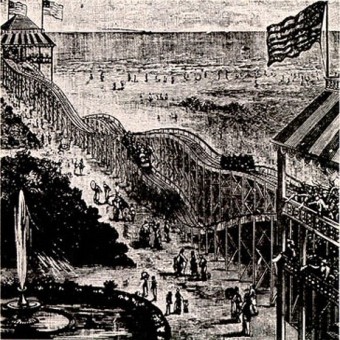 Much to the delight of thrill-seekers everywhere, the first rollercoaster made its debut at Coney Island in Brooklyn, New York on June 16, 1884. Known as a switchback railway, the rollercoaster that customers paid a nickel to ride on that day bore little resemblance to the coasters we’re familiar with now.

The brainchild of LaMarcus Adna Thompson, the design was reportedly inspired by the switch-back gravity railway used by coal miners in Pennsylvania. The first version of the rollercoaster was actually two wooden “hills” parallel to one another. Riders would climb a tower and board a car – sitting sideways – to begin their journey down the track at a rip-roaring 6 mph. When the vehicle reached the top, it was “switched back” to a return track for the trip back to the starting point. Whee.

The rollercoaster proved to be a resounding success and was raking in hundreds of dollars a day, an incredible feat considering it only cost a nickel to ride. Within a year, an oval course was developed by Charles Alcoke that allowed passengers to remain in their seats throughout the entire ride. This coaster, called the Serpentine Railway, had front-facing seats which became the standard from that point on.

LaMarcus Adna Thompson was still working on improving his original idea. He patented his design of rollercoaster rides complete with tunnels and painted scenery in 1884. He had many of these coasters, called the “The L.A. Thompson Scenic Railway,” built across the country, and they proved to be very successful. Some remained in operation until 1954.

Many of the earliest coasters have been torn down to make way for larger ones, and most built before 1930 have gone to rollercoaster heaven. But today a lot of modern rollercoaster companies are building hybrid coasters which combine the safety and structural integrity of steel construction with the old-time feel of a wooden track.