What Does the Arabic Prefix “al-” Mean? 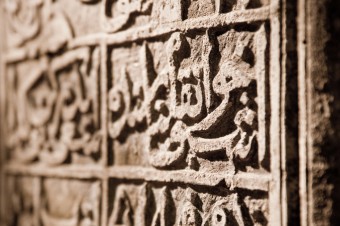 Roughly translated to “the,” the Arabic word “al-” is prefixed to nouns to make them definite. For example: “kitab ‘book’ can be made definite by prefixing it with al-, resulting in al-kitab ‘the book’.”

Comprised of two letters, ālif (ā) and Lām (l), frequently, al- is placed in front of proper nouns, and in particular, the names of locations, such as al-Anbār; note that even when used with a proper noun, al- is left lower case.

It should be noted that the prefix al- should not be confused with “the form Āl, a different Arabic construction that is used to designate a family or tribal name.” With the latter, the pronunciation does not change regardless of the letter that follows Āl. In addition, as a part of a proper name, Āl is always written with a capital “A.”

There are several competing theories on the etymology of al-. Some claim:

Al- comes directly from the Arabic negating particle , lā . . . [where] the lām [l] and ālif [ā] swapped positions. It is noteworthy that the negation denoted by lā and the definiteness denoted by al- are in stark contrast to each other . . . . A[nother] popular theory is that al- comes from the same proto-Semitic source as the Hebrew definite article ha- . . . . According to [an expert], many . . . Semitic languages have particles that bear similarities to al-.

Notably, the prefix el- is simply “a different way of writing the same word.” It is said that el- more closely resembles the word’s proper pronunciation, but al- is the more accepted version, at least in America.

The most common uses of the prefix occur when the listener is already aware of the definite noun being referenced, when referring to a “class noun” (i.e., “the Mercedes is an excellent car”) as well as, of course, at the beginning of some names.