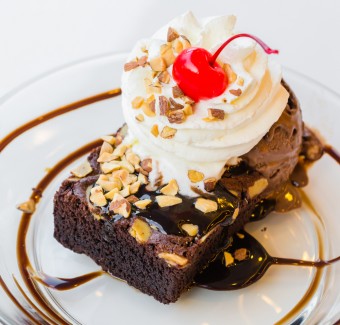 There are many, many origin theories for this one. One of the most often repeated and widely accepted theories is that “brownie points”—imaginary points earned by someone for doing a good deed, and lost by doing something unfavourable—stem from the Brownies, a tier of 7-10 year old Girl Scouts or Girl Guides.

The Girl Scout or Girl Guide Brownies took their name from the mythical creature, the brownie. The mythical brownies were known for being kind and helpful and performing household chores while a family sleeps. The girl-brownies are supposed to emulate this behaviour, being quietly helpful without asking for much in return.

As a reward for doing good deeds, Brownies receive badges—or, if you’d like, “brownie points.” Many people assume that this is how the term originated, going so far as to call them “Brownie points” with a capital B. It may very well be the origin of the term, but there are many other contenders as well, and this is one of those cases where multiple factors may have coalesced to help create and popularize the phrase.

Wartime food rationing is another possible origin of brownie points. People were given ration points in different colours with which to buy food in the United States. Red or brown points were used to buy meat, which would have been a sought-after commodity. “Brown points” could easily have turned into “brownie points.” Alternatively, it might relate to the slang “brown-noser,” which seems to have first popped up around 1939.

While these theories are by no means the only ones, they do appear to have the most credence and a couple of them may be linked, combining to result in “brownie points.”

The Girl Scout Brownies theory is the only one that explains an actual point system for doing good deeds. Further, the term “brownie points” started off in the school yard, working itself into student slang, and was recorded in the 1944 edition of American Speech:

A person who is always asking and answering questions in class to impress the instructor. Also a person who stays after class to try to insinuate himself into the teacher’s good graces.

This hints at the “brown-noser” connection, and certainly one can see how the behavior of Brownies might have overlapped with that of brown-nosers, with the Girl Scouts perhaps even earning points for some of this behavior.

At some point this schoolyard slang percolated to members of the military during WWII where “brownie points” was used as a sarcastic sort of insult. As with many other things, the soldiers helped the phrase spread.

By 1951, the term was still relatively new among certain portions of the masses. That year, Marvin Miles published an article called “Brownie Points—a New Measure of a Husband” in the Los Angeles Times, detailing his experiences hearing about brownie points. He goes to some length to describe what brownie points are, suggesting that it wasn’t a well-known term in the area.

I first heard about them [brownie points] when the chap standing next to me in the elevator pulled a letter from his pocket, looked at it in dismay and muttered “More lost brownie points.”

Figuring him for an eccentric, I forgot about them until that evening when one of the boys looked soulfully into the foam brimming his glass and said solemnly: ‘I should have been home two hours ago … I’ll never catch up on my brownie points.’

Brownie points! What esoteric cult was this that immersed men in pixie mathematics?

‘You don’t know about brownie points? It’s a way of figuring where you stand with the little woman – favor or disfavor. Started way back in the days of the leprechauns, I suppose, long before there were any doghouses.’”

As you can see, Miles’ informant believed that the term was related to the mythological creature. As the Brownies were inspired by the brownies, this is perhaps not entirely incorrect assuming the Girl Scouts really are to thank for this expression, maybe with a little (or a lot of) help from the previously existing “brown-noser,” which may have even independently inspired the phrase.