May 8, 2014 Emily Upton and Karl Smallwood
Carmen asks: Was Beethoven really deaf when he wrote all his music? 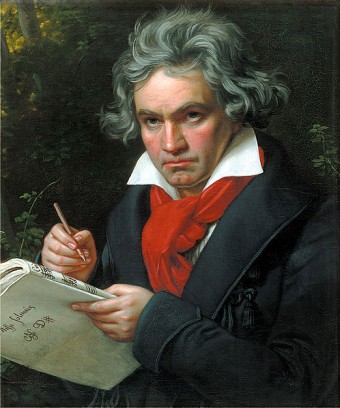 If there is one Ludvig van Beethoven fact everyone knows it’s that he was deaf. But just saying “he was deaf” leaves a lot of pertinent questions unanswered, such as how deaf was he? How did he communicate with people? Of course, the biggest question is how did he compose what is considered some of his greatest music while he was deaf.

Beethoven was born in 1770, and was introduced to music at a young age by his father who was a piano and violin teacher as well as a talented tenor. Young Beethoven was considered a child prodigy when it came to music, and performed his first public concert in his hometown of Bonn when he was just seven years old.

He continued his musical career while learning from some of his great contemporaries, like Christian Gottlob Neefe, who taught him composition. He played viola in the court orchestra and became familiar with operas, several of which were by Mozart. He continued to study Mozart, along with Bach and other famous composers. By 1791, Beethoven had composed several of his own works and began publishing these compositions just a few years later.

All of Beethoven’s achievements above were done—as far as we can tell—with quite good hearing.  This soon changed. Starting around 1796, we have references of Beethoven mentioning in letters hearing “buzzing noises,” but it wouldn’t be until 1801 when we have documented evidence that he had been gradually going deaf. Specifically, Beethoven wrote to his physician, stating:

For the last three years my hearing has grown steadily weaker . . . I can give you some idea of this peculiar deafness when I must tell you that in the theatre I have to get very close to the orchestra to understand the performers, and that from a distance I do not hear the high notes of the instruments and the singers’ voices. . . Sometimes too I hardly hear people who speak softly. The sound I can hear it is true, but not the words. And yet if anyone shouts I can’t bear it.

The exact cause of Beethoven’s deafness is unknown, theories have ranged from syphilis to the composer’s habit of dunking his head in cold water whenever he was tired, among many others.

It isn’t known precisely when he went completely deaf. There are documented instances of people needing to shout in his ear in order for Beethoven to hear them in the 1810s, and his hearing continued to decline from there. It is known that Beethoven continued seeking (fruitless) medical advice and treatment for his hearing up until 1822, after which the composer finally accepted that his hearing was never going to improve and stopped seeking medical aid for his condition.

Beethoven’s music, which is generally split into three periods, reflects the gradual decline in his hearing. The Early Period lasts from Beethoven’s childhood to around 1803, when he had both the First and Second Symphonies under his belt in addition to the accomplishments described above. During this period, he could mostly hear and his music was characterised by higher notes.

The Middle Period starts right around the time Beethoven’s decline in hearing was becoming severe and ends just before the 1820s when he was presumed to be totally deaf. This period is characterised by lower notes, with the number of high notes he used dropping significantly. As you can probably guess, since high notes were giving him trouble, he switched to lower notes so that he could better hear the music he was creating. Compositions like the Moonlight sonata, the opera Fidelio, and six symphonies, among others, were written during the Middle Period

The Late Period starts just before 1820. During this time, his music switched back to including more high notes. If he wasn’t already fully deaf at the start of this period, he was likely close to it. The reintroduction of higher pitched notes suggest that he was resolved to “listening” with his inner ear rather than actually hearing the music he was creating.

One of Beethoven’s biggest accomplishments during the Late Period was the composition of the Ninth Symphony, which he began working on in 1822 and was first performed in 1824. There is a popular story that Beethoven conducted this symphony, and kept on conducting even after the players had finished as he couldn’t hear the applause behind him nor that the music had stopped. Beyond his eyes working just fine, allowing him to see (even if only peripherally) that the musicians had stopped,  this seems unlikely, at least the way the story is commonly stated. If he was indeed conducting, he would have needed to have the music timed perfectly in his head, and if he didn’t, this would have made him a nearly useless conductor. Unsurprisingly given his deafness and the importance of timing in conducting, most historians think that he merely assisted the actual conductor on stage, but did not conduct himself. Whatever the case, it was reported that he received a standing ovation.

While the loss of his hearing was a crushing blow to the man, this was actually a boon to history. As his hearing diminished, he took to writing to communicate with people, resulting in numerous letters and “conversation books,” many of which have survived providing incredible insight into Beethoven’s life and music.  For instance, in a letter to a friend he vocalized his social struggles and his concern over his future on account of losing his hearing: “For two years I have avoided almost all social gatherings because it is impossible for me to say to people ‘I am deaf.’ If I belonged to any other profession it would be easier, but in my profession it is a frightful state…” He went on to say that, “Of course I am resolved to rise above every obstacle, but how will it be possible?”

In the end, Beethoven’s ability to hear for much of his life and mastery over music composition during that time enabled him to continue to compose new music while deaf. Where the disability ended up causing the most trouble was simply in performing in concerts, which he could no longer do with ease. Unfortunately for him, this was a significant source of income that, once he became functionally deaf, he could no longer earn.  Beethoven’s final public performance took place in April of 1814, playing his so-called “Archduke Trio”, known formally as Beethoven’s Piano Trio in B-flat major, Op. 97. Reportedly, Beethoven’s deafness severely impacted his performance.  Composer Louis Spohr had this to say after watching a rehearsal for Beethoven’s last performance:

On account of his deafness there was scarcely anything left of the virtuosity of the artist which had formerly been so greatly admired. In forte passages the poor deaf man pounded on the keys until the strings jangled, and in piano he played so softly that whole groups of notes were omitted, so that the music was unintelligible unless one could look into the pianoforte part. I was deeply saddened at so hard a fate.

Beethoven passed away in 1827. During an autopsy, they found that his auditory nerves had atrophied and Eustachian tube was narrowed. This certainly explained why he was deaf, but not what had caused it. Beethoven himself would commonly blame it on gastrointestinal problems or typhus.