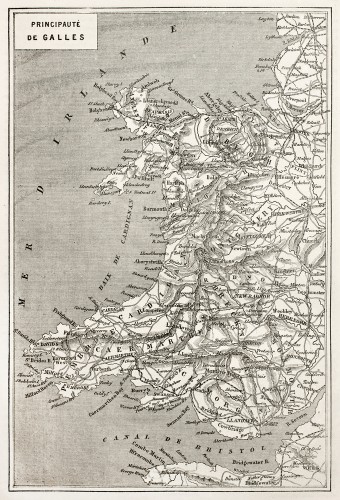 Today I found out the origins of the names of the historic counties of Wales and Northern Ireland.

Anglesey is believed to be a Viking place name. The Vikings denoted islands with the suffix “ey.” The best bet is that Anglesey started out as “Ongl’s Ey,” but no one knows who Ongl might have been.

Brecknockshire, as well as Brecon, stem from the old kingdom of Brycheiniog. The kingdom was likely established in the 5th century by Irish raiders and acted as an independent kingdom in the Brecknockshire area through the middle ages. Unfortunately, we don’t know what Brycheiniog itself means. Tradition says that the kingdom was founded by a man named Brychan, and if that’s true then it’s possible it simply means something like “Brychan’s place.”

Back in the day, this place used to be known as Caer-yn-afron, which meant “stronghold opposite the island.” In this case, that island would be Anglesey, which is just off the coast of Caernarfonshire.

The marthen part of Carmarthenshire comes from the Celtic Moridunon, which the Romans translated to Moridunum. It means “sea fort.” The car part is probably derived from caer, which as you can see above, means something along the lines of “stronghold.” Bonus fact: in Welsh, this area is known as Caerfyrddin – that is, “fortress of Merlin.”

This is an anglicised version of Ceredigion, which literally means “Ceredig’s land.” Ceredig was a man who lived in the area sometime in the fifth century. Yes, this is also the origin of the word for the button-up sweater, which was named after James Thomas Brudenell, the Earl of Cardigan, in the 1860s.

Denbighshire is taken from the Welsh Denbych, which means “little fortress.” The county takes its name from the town, which was established in the 11th century. In the early 1200s, it was captured by the English and submitted to English rule.

There are a couple of theories about how Flintshire got its name. Some believe that it was once named Llyn-dinas, which meant “lake fortress,” and that was later corrupted into “Fllynd” and changed to “Flint.” An alternative is the more obvious meaning: it was named for the rock on which the castle was built upon.

Glamorgan is a shortened version of gwlad Morgan. The word gwlad in Welsh means “country.” Morgan comes from the Old Welsh Morcant, which means “sea circle.” Gwlad Morgan was a kingdom between the Wye and Tawe Rivers.

This is derived from the Welsh Meirionnydd. Meirion is derived from the Roman Marius, which is related to Mars, the god of war, or from the Latin mas, meaning male. The word mynydd means “mountain” or “moorland” in Welsh, which might be the origin of the end of the name.

A river flowing through the county is called Mynwy in Welsh, which was anglicized to “Monnow.” The town from which the county gets its name was called Abermynwy, or “mouth of the Monnow.” Monmouth is a shortened, anglicized version of this.

There are several different theories about where Montgomeryshire got its name. It is of Norman origin and most likely means something along the lines of “Gomer’s Mountain.” However, it could also mean “mountain man,” from the Germanic root guma. Roger de Montgomerie, Earl of Shrewsbury, was one of the first recorded Montgomeries and likely lent his name to the county.

Pembroke comes from the Welsh Penfro, which means “land’s end” or “headland.” Over time, the word’s pronunciation changed and Pembroke became more popular.

Radnor comes from the Old English read, which means “red,” and ofer, which means “bank.” Radnor, therefore, means “at the red bank.” 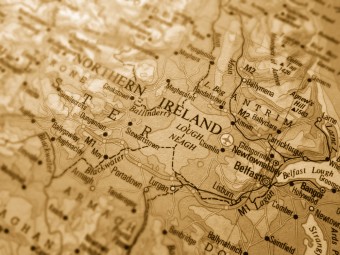 Antrim takes its name from the Irish Aontroim, which was previously Aontruim and Aontreibh, meaning “lone dwelling.” Bonus fact: Belfast is mostly in County Antrim, but parts of it are also in County Down. Belfast comes from the Irish Beal Feriste, which means “mouth of the sandbanks.”

Armagh gets its name from the goddess Macha, one of three war goddesses who was known as “the slaughterer of men” alongside her fellow war goddess Morrigan, who you might know from Arthurian legends. The name of Armagh used to be Ard Mhacha, or “Macha’s height.”

The word dún is a generic word meaning “fortress,” and Down is derived from dun. In the county’s case, it was likely taken from Dún-da-leth-glas, a fort in the area meaning “fortress of the two broken fetters” (a fetter is a chain used to detain a prisoner).

There are a couple different theories about where Fermanagh comes from. Most people agree that it is derived from the Irish Fir Manach or Fear Manach. Some people believe that this means “region of the monks.” Others argue that it means “men of Manach,” and that Manach comes from Magh Eanagh, which means “country of the lakes.” Therefore, the whole thing means “men from the lake country.”

Many of the residents of Londonderry simply call it “Derry.” Derry comes from the word Doire, the area’s original name when it was just a monastic settlement. The word means “oak grove.” Around the 1600s, the “Derry” spelling was agreed upon, and that was also around the time “London” was tacked on the front. After the Plantation of Ulster in 1608, the county of what is now known as Londonderry was given to the London Guilds in hopes of establishing a loyal, anglicised population there. To this day, “Londonderry” is a reminder of that time, and is something of an insult to the residents there.

Tyrone comes from the Irish Tir Eoghain, which means “Land of Eoghan.” It was named after Eogan mac Neill, who founded the Kingdom of Ailech where Tyrone sits today.