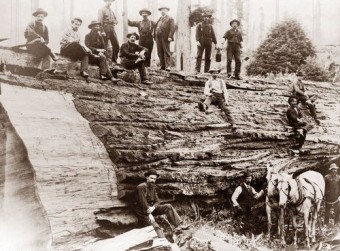 In the connected 21st century, it can be hard to imagine how, for most of history, different cultures existed in relative isolation from each other. Even as late as the 19th century, those living in self-sustaining and remote rural communities had little commerce with the outside world, and scant news made it in or out.

In a handful of these populations across the globe, a few individuals developed unique and dramatic overreactions to unexpected stimuli that, even today, confound explanation.

For most, when exposed to an unanticipated noise, command or movement, the normal startle reaction will occur:

A stereotyped motor pattern . . . consisting of eye blinking; facial grimacing; flexion of the head; elevation of the shoulders; and flexion of the elbows, trunk and knees.

Some, however, are startled in a much more dramatic way, and their extreme reactions can be divided into three different conditions.

Hyperekplexia, in its extreme form, sees its victims go rigid when exposed to a surprise – to the point where they will fall face first to the floor (think Petrificus Totalus). Similarly, those who suffer from startle epilepsy experience seizures when suddenly presented with a sensory change (such as temperature, taste or sound).

A third syndrome, sometimes called “jumping,” produces even more sensational reactions. Found in relatively few communities across the globe, victims of jumping syndrome display a variety of extraordinary symptoms from swearing to hitting, mimicking to knife throwing, and complete obedience to, yes, jumping.

Dr. G.M. Beard found the lumberjack Frenchmen at Moosehead Lake, Maine in 1880, and his report of their bizarre reactions has been repeated often:

Whatever order was given them was at once obeyed. Thus one of the Jumpers who . . . was told to throw [a knife] . . . threw it quickly so that it stuck in a house opposite [and] at the same time, he repeated the order to throw it with a cry of alarm. . . . He also threw away his pipe, which he was filling . . . when he was clapped upon the shoulder. Two Jumpers standing near each other were told to strike, and they struck each other very forcibly. . . . When the commands are uttered in a quick loud voice, the Jumper repeats the order. . . . They could not help repeating the word or sound that came from the person that ordered them, any more than they could help striking, dropping, throwing, jumping, or starting. . . . It was not necessary that the sound should come from a human being . . . . One of these Jumpers came very near to cutting his throat while shaving on hearing a door slam. They have been known to strike their fists against a red-hot stove, to jump into fire and into water. They could not help striking their best friend, if near them, when ordered. . . . It was dangerous to startle them in any way when they had an axe or knife in their hands . . . .

Beard’s narrative affected many other researchers, including inspiring Georges Gilles de la Tourette in his study of the tic disorder that today bears his name.

First recorded in western literature by Sir Hugh Charles Clifford in the sensitively-titled Studies in Brown Humanity in 1898, latah, which is found predominantly in Malaysian and Indonesian populations, causes its victims to shout obscenities, obey commands, and imitate actions and words. As with the lumberjacks, latah symptoms can be triggered either by human commands or unexpected stimuli, such as a bored little brat:

The villainous small boy who had first discovered [the latah sufferers’] weakness . . . seized a long rattan . . . and smote the sirih-box, as it lay between the two . . . making the wooden covering resound . . . . The sudden unexpected noise at once deprived both men of all power of self-restraint. Each gave a sharp cry, and a ‘jump’ . . . and since there was nothing to distract their attention from one another, they fell to imitating each other’s gestures. For nearly half an hour . . . these two men sat opposite to one another gesticulating wildly and aimlessly, using the most filthy language, and rocking their bodies to and fro. They never took their eyes off one another for sufficient time for the strange influence to be broken . . . [until one] fell over . . . in fits, foaming horribly a the mouth . . . .[i]

Although latah is principally found among Indonesians and Malaysians, members of other cultures have displayed similar symptoms, including Filipinos, Indians, Somalis and Jordanians.

As with the other two, those suffering from miryachit are helpless slaves to their syndrome. As reported by Dr. William A. Hammond in 1884, victims of this condition were incapable of preventing their bodies from betraying them:

It seemed that he was afflicted with a peculiar mental or nervous disease, which forced him to imitate everything suddenly presented to his senses. Thus, when . . . any noise were made suddenly, he seemed compelled against his will to imitate it instantly with remarkable accuracy. . . Some . . . imitated pigs grunting, or called out absurd names . . . and [he] suddenly startled, would echo them all precisely. . . . [One] incident . . . illustrated the extent of his disability. The captain . . . running up to him, suddenly clapping his hands at the same time, accidentally slipped, and fell hard on the deck. Without having been touched . . . the [sufferer] instantly clapped his hands and shouted, and then, in helpless imitation, he, too, fell as hard and almost precisely in the same manner and position as the captain.

This poor soul in Dr. Hammond’s account tried to mitigate his suffering by “frequently shut[ting] himself up in his pantry . . . and lock[ing] the door,” but as he was surrounded by cruel people who enjoyed tormenting him, “he could [still] be heard answering grunts, shouts or sounds on the bulkhead outside.”

There is no single cure for the syndrome, as its precise cause is unknown. Because the condition recurs within populations but is not found universally, some theorize the syndrome may be the result of “culturally-specific operant conditioning,” where the behavior is learned and (somehow) reinforced.

Others believe jumping syndrome may actually be a somatic neurological disorder caused by a gene mutation that is not inherited, and that “cultural influences . . . mediate the severity and expression of such a disorder in individual cases.”

While adults with hyperekplexia are typically treated with anti-anxiety and anti-spastic medicines, the treatment for jumping syndrome often focuses on eliminating or reducing stress, anxiety and intentional startling.