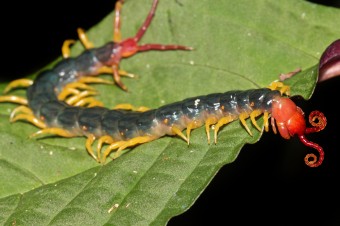 Skittering along at about an inch off the ground, one of the most vicious predators on the planet is often smaller than its prey, blind as a bat and utterly freaking creepy.

Typically reaching 10 inches in length (although some overachievers grow to a full foot long), Scolopendra gigantea is the largest species of centipede on the planet. Native across South America, the giant centipede has also been found in Puerto Rico and Jamaica.

An arthropod with a tough exoskeleton, S. gigantea has between 21 and 23 separate sections, each with its own pair of legs. At its head, this creepy invertebrate has two antennae and a pair of mandibles called forcipules that contain venom that is injected into prey.

The giant centipede breathes through spiracles (holes in its outer shell) that connect to a number of trachea that dispense oxygen to the beast’s tissues and remove carbon dioxide from its body. Instead of blood, centipedes have hemolymph, a fluid:

S. gigantea’s heart is just a “long hollow tube heart that runs [its] length . . . and contracts to move the liquid.”

When freshly hatched, a young giant centipede looks just like mom, although a lot smaller. As it grows, its exoskeleton becomes too small, so this arthropods molts (sheds its skin), to be replaced shortly thereafter with a newer, bigger outer shell. This process repeats over and again.

To reproduce, the male centipede produces a spermatophore that the female finds and stores in her spermathacae. She releases the spermatophore when she drops her eggs (between 15-60), thus fertilizing them. Then, in an outpouring of motherly love, she coils around them until they hatch.

Possessing a large brain (for a bug), the rest of S. gigantea’s nervous system is two long nerve cords that span the length of its body. Together with eyes that only see shadows and light, this creature’s nerves make it irascible and jumpy.

Fierce and hungry, S. gigantea can capture and kill animals larger than itself, including frogs, lizards, snakes, mice, small birds and bats.

Grasping its victim with a few pairs of legs, the giant centipede injects its venom. Composed of acetylcholine, histamine and serotonin, among other things, the venom paralyses, but doesn’t kill, the prey.

Going to great lengths for a tasty meal (who wouldn’t?), the giant centipede is known to scale cave walls to get at bats:

On 21 December 2000 . . . we found a S. gigantea perching from the ceiling of the . . . cave . . . while feeding on a dead [bat]. the centipede was .3 m from the nearest vertical wall and 2 m from the ground. . . . The centipede remained attached to the ceiling with only the last five pairs of legs, held the bat using its first eight pairs of legs (excluding the . . . poison claws) and fed while it moved its head from side to side.

In this instance, the centipede weighed about 40% less than the bat prior to feeding (but almost the same after) and after autopsying both the bat and the vicious killer, the scientists determined:

The centipede started eating around the bat’s neck, continued into the chest, and then into the abdominal region. [Over a period no longer than 3 hours] the centipede had devoured about 35% of the bat’s body mass.

The giant centipede has a simple digestive system made of three parts: foregut, midgut and hindgut. Inside the cruel mistress that savaged the bat, pieces of bat gut were still in her foregut, large bits of lung and muscle were found in her midgut and hair and skin had already made it to the hindgut.

Aggressive and poisonous, apparently few animals hunt the giant centipede. One intrepid species, however, is Centruroides testaceus. At less than two inches long, the tiny yellow scorpion attacks the much larger centipede, injecting her with his fatal venom, while she is relatively immobile, guarding her eggs.

If, like a few brave souls, you are considering keeping a giant centipede as a pet, consider the following advice:

Never handle the giant centipede. While its venom is not usually fatal for humans, it can cause intense pain. A man who was bit by a much smaller red-headed centipede described the experience: “It felt like someone had stuck a hot soldering iron under my skin. . . . By that evening it was up to my forearm, and the next day the swelling was past my elbow [which was] as big as my face.”

Treat them with kid gloves. Big babies, if a giant centipede gets too stressed, it can die. One common way to overtax this high-strung beast is to put too many prey animals in its cage. Otherwise, they like a wide variety of food.

Spend the money on a well-sealed, glass aquarium. Giant centipedes are “very good escape artists [and will] crawl up the side of the tank with just the last few legs on the ground.” A proper cage will be 2x as long and about as wide as the centipede’s length, and it should definitely be taller than he is long. Also, make sure the lid fits tightly.