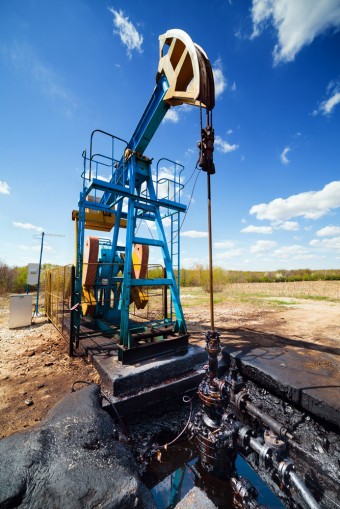 Three hundred million years ago (or so), about the time amphibians first emerged from primordial seas, enormous, lush swamps filled with large trees, ferns and other leafy plants thrived along the coasts of the ancient ocean, which itself was filled with algae and billions of microorganisms.

Plants and algae breathe in carbon dioxide (CO2), and use sunlight and water to convert it into the carbon that makes up their tissues and food. As primeval plants, algae and creatures died, they took their trapped carbon with them to the bottom of ancient swamps. Over time, and across vast forests, gigantic deposits of plant material accumulated, and it, in turn, was alternately covered with sand, clay, minerals and rock. As the covering materials pressed down on the carbon-rich organic matter, it was ultimately changed into one of the fossil fuels.

Peat swamps, wetlands where large amounts of plant material accumulate and slowly and quietly sink, are the nurseries of coalfields. Protected from the erosive effects of oceans waves and rivers, the organic material is transformed into peat through the work of bacteria, fungi and oxygen from the atmosphere that change the plant matter, as does the pH of the surrounding water. Once “the oxygen in the peat has been depleted, anaerobic bacteria . . . continue the process of degradation.”

After the plant material turns into peat, it is buried by sediment. Over millions of years, the pressure from above and heat from the earth squeeze and evaporate any residual moisture from the peat and it is transformed into coal.

Petroleum begins its existence with deposits of “phytoplankton, algae and other marine organisms” that die and fall to the seafloor, eventually forming large deposits of organic matter. The proteins and cellulose break down soon, leaving only “one fraction of organic matter . . . the lipid fraction [that] contains the precursors we find in crude oil.”

As increasingly more sediment layers are accumulated, those at the bottom are compressed, which increases the temperature. Over millions of years, simple organic molecules are changed into complex ones, called kerogens. Together with the remaining lipids, over time the kerogens are “cracked” by pressure and heat and transformed into petroleum. Depending on the arrangement and composition of the petroleum’s carbon and hydrogen, the hydrocarbon will be liquid (oil) or gaseous (natural gas).

Natural gas can also be formed biogenically, when special microorganisms, called methanogens, chemically break down organic matter, producing methane. When producing useful natural gas, these methanogens are found in places without oxygen yet near the surface of the earth. When producing embarrassing and unhelpful farts, these methanogens are found in your intestines. One common example of natural gas that is biogenically-produced outside of your body is that generated in landfills.

With the increasing pressure on these finite resources by an ever-developing world, producers are constantly looking for new sources of fossil fuels, including the harvesting of petroleum from oil sands.

A recent controversy has erupted in North America over the Keystone XL Pipeline, a proposed conduit connecting the oil sand fields of Alberta, Canada, over a series of phases to the refineries of the Gulf Coast of the United States.

While opponents of the pipeline are concerned about spills and the release of even more carbon into the atmosphere (read: global warming), at the height of the controversy, shortly before the last Presidential election in June 2012, according to a Rasmussen poll, 60% of U.S. likely voters favored building the pipeline.

How Does Oil Form?

How Fossil Fuels Were Formed

The Natural Gas Revolution: At the Pivot of the World’s Energy Future