January 14, 2014 Karl Smallwood
Kevin asks: What would happen if you froze water, but the container was so strong the water couldn’t expand into ice? 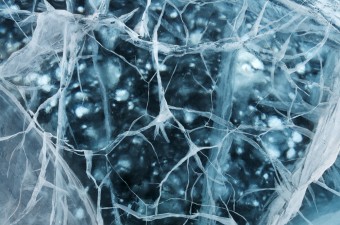 Some readers may recall a science class in which an excitable teacher walked to the front of the class to show off a small, cracked steel container, seemingly damaged by an incredibly powerful, but tiny force; only for said teacher to reveal that the damage had been done by nothing more than water. However, what would happen if you put the water in a container it couldn’t break out of and then froze it?

The short answer is that the water still turns into ice; however, if it genuinely cannot break the bonds of the container it is trapped inside, it turns into a very different kind of ice than we’re used to seeing.

We currently know of 15 different “solid phases” of water, aka ice, with each type  being distinct due to differing density and internal structure. The form you’re likely most familiar with is Hexagonal Ice which is what happens when water freezes normally under regular conditions. If you keep lowering the temperature of Hexagonal ice, it eventually becomes Cubic Ice; tweak the temperature and pressure further and you can create Ice II, Ice III all the way up to Ice XV.

Due to the inherent difficulty of producing such high/low pressures and temperatures, it has taken science up until as recently as 2009 to fully document every known form of ice.  The majority of ice’s final forms were discovered in part by a group of researchers in the Chemistry department of Oxford University who were able to create Ice XII, XIV and XV for the first time.

In the case of Ice XV, creating it involved taking Ice VI and slamming the temperature down to -143 degrees Celsius before exposing it to pressure 10,000 times greater than the Earth’s own atmosphere. This final form of ice, and by extension form of water, still managed to surprise even the minds at Oxford when against all of their expectations, it proved to be totally antiferroelectric, being unable to hold a charge at all.

But in the simplest sense, the different forms of ice are created through a varying combination of both pressure and temperature, the exact combinations of which can be found out by taking a quick look at the phase diagram of water. However, scientists can artificially tip the scales in their favour through various means. For example, when creating Ice XIII and XIV, Dr Christoph Salzmann and his team at Oxford used careful measures of hydrochloric acid to alter the temperature needed to create the ice.

If the above seems rather simple in the scheme of things, that’s because it was and other scientists, such as Professor John Finney (who was part of the team that discovered and created Ice XII in 1996) noted as much when questioned about it, commenting that Salzmann’s team had done in a few years what other researchers couldn’t do in 40.

Back to the question at hand, regular ice, or at least the version you were familiar with before we told you about the other 14 kinds, is capable of applying massive amounts of force when it freezes and expands. This is due to a very unique trait of water, mainly that it is less dense as a solid than as a liquid. This density disparity is due to how the molecules of water react upon freezing; water molecules join together in a rigid hexagonal structure which leaves a small, but nonetheless significant gap between the atoms that wasn’t there when the water was liquid. For the curious, water reaches its densest point at 4 degrees Celsius; any cooler or hotter and it begins to expand.

So exactly how much force is the ice capable of exerting? Well, people have been trying to work this out for a long time. In 1784 and 1785, one Major Edward Williams took advantage of the weather in Quebec and repeatedly tried and failed to find a method of containing ice. Williams at first tried to seal water inside of artillery shells, the cast iron plugs of which were launched  475 feet at an astonishing 20 feet per second when the pressure become too great. Unperturbed, Williams then took to anchoring the plugs in place using hooks, only for the shells to split in two.

In another experiment, an attempt was made to fill cannons made of one inch thick cast iron with water only for them too to split when it was frozen. Academics in Florence later tried to fill a ball made of one inch thick brass with water only for that too to crack when it was frozen. They later worked out that the force required to do so clocked in at around 27,720 pounds.

For a more exact answer, you need to once again go back the the water phase diagram, which shows that ice will turn into Ice II when the pressure reaches 300 Mega Pascals, which is exactly, 43,511.31 pounds of force per square inch. In other words, that’s the amount of pressure a container would need to be able to survive to stop water turning into regular ice, instead causing it to turn into Ice II.

So, to answer the initial question, if you froze water inside a container so strong it couldn’t turn into ice, it would still turn into ice, just a slightly different type of ice in terms of scientific classification and its internal structure. Science!

Find many more fascinating questions answered in our new book: The Wise Book of Whys, also available in audiobook form with 5 hours for just $5