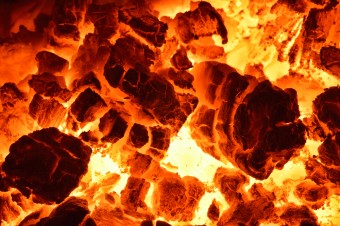 Most of us experience combustion, a chemical process where a fuel combines with oxygen to produce heat and light, in the form of a fire where both the fuel and ignition source are well known.

In some circumstances, however, the trigger that ignited the fire is not a definite source, like a match, but a complicated, often hidden, process. Seeming to have sprung up spontaneously (hence the name), these fires are often the result of long-term chemical reactions.

According to a study supported by the CDC:

Spontaneous heating of coal occurs when sufficient oxygen is available to sustain the low temperature reaction of coal with oxygen but the heat produced by the coal oxidation is not adequately dissipated by conduction or convection.

This process begins a vicious cycle where the rate of oxidation increases as the temperature increases and vice versa, or in what the study authors call a “thermal runaway [where] a fire ensues.”

Relatively common, as of January 2013, over 200 coal fires were burning in the U.S. alone. These blazes are notoriously difficult to extinguish, and one coalmine fire that could have arisen from spontaneous combustion, the Centralia Mine Fire which ignited in 1962, still burns today.

Counter-intuitively, hay will spontaneously combust if it gets too wet. According to the Washington State University Extension:

Dry hay (stored at 15 percent moisture or less) is safe for long-term storage. However, if the hay has become wet the quality has been permanently changed and the potential fire hazard from spontaneous combustion increased.

How does this work? As the Extension experts note, this spontaneous heating is the result of biological and chemical forces:

The wet hay will first stimulate microbial growth and as these organisms grow they produce heat while drying out the surrounding surfaces of the hay for energy. More drying surfaces produces more microbial growth . . . . When the bale temperature reaches about 150F . . . heat resistant bacteria, called exothermic bacteria, start a process of chemical change that rapidly increases the temperatures to the point of spontaneous combustion.

Haystack fires are serious business. One large fire (cause unknown) in Yolo County, California burned for several days, and losses were “estimated at $2 million.”

A common household product, linseed oil is used to protect wood and clean tools. Typically, cloth rags are soaked in the oil in order to make application easier; however, when these rags are not properly stored:

Linseed oil evaporates very rapidly causing an exothermic reach, which accelerates as the temperature of the rags increases. When the accumulated heat exceeds the rate of heat dissipation, the temperature increases and may eventually become hot enough to cause the rags to spontaneously combust.

These fires have been known to cause tremendous damage. In 1991, one of the most devastating high rise fires in the United States, in which three firefighters died, was found to have been started when “workers left behind rags stained with linseed oil.”

Easily prevented, firefighters suggest “putting your used rags on a non flammable surface to dry, in an open area like your driveway. . . . Just lay them out flat . . . Once they are dry, you can clean them up.”

In the typical case where spontaneous human combustion (SHC) is suspected, a body is found that appears to have been burned from the inside out; and, while there is tremendous burn damage to the person’s torso, her extremities (hands, feet and limbs), as well as her surroundings, are not touched by the fire.

Proponents of SHC will often point to any of several potential internal causes for the blaze. Methane in the intestines (think farts) is often suggested as a fuel source, and some believe naturally occurring enzymes could be the catalyst. Static electricity has also been named as a potential culprit.

These true believers point to stories like that of an Oklahoma man whose horribly burned body was found in his kitchen, surrounded by items and furniture that was not damaged. The 65-year-old victim was known to be a heavy smoker and drinker. Some proponents point out that alcohol is also flammable, but argue that its action had to be internal, or else other flammable items in the home would have burned.

Naysayers take this same evidence and use it to disprove the theory. They claim that these deaths occur because the human body has acted like “an inside-out candle:”

A candle is composed of a wick on the inside surrounded by a wax made of flammable fatty acids. The wax ignites the wick and keeps it burning. In the human body, the body fat acts as the flammable substance, and the victim’s clothing or hair acts as the wick. As the fat melts from the heat, it soaks into the clothing and acts as a wax-like substance to keep the wick burning slowly. Scientists say this is why victims’ bodies are destroyed yet their surroundings are barely burned.

So, regarding the Oklahoma man, naysayers would argue that he likely passed out, from drinking or otherwise, and a hot ash from his cigarette, or another external source, ignited the fire.  As fire tends to burn upwards, rather than out, as long as nothing extremely flammable is around the man, we simply have a human candle that burns away leaving surrounding areas seemingly untouched.

Recent scholarship appears to have discovered the fuel, if not the ignition mechanism. In a study performed by Cambridge research biologist, Brian J. Ford, it was determined that acetone, a naturally occurring substance in the body, could cause the injuries seen with suspected SHC victims.

Acetone is characterized by Prof. Ford as “one flammable constituent in the body that can greatly increase in concentration,” and this happens when a body is in a state of ketosis. Potential causes of ketosis include certain diets, diabetes, teething and even alcoholism. Regardless of its source, acetone is highly flammable.

In his experiment, Prof. Ford

Marinated pork tissue in acetone [then used it] to make scale models of humans, which we clothed and set alight. They burned to ash within half an hour

Ford concluded that “for the first time a feasible cause of human combustion has been experimentally demonstrated.”