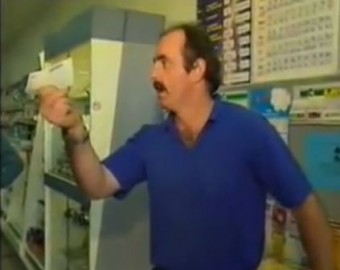 In 1999, 37 year old Bill Morgan was a truck driver living in a travel trailer in Australia. That’s when disaster struck- while working, he got in a pretty bad accident that he nonetheless survived. However, medication he was given during his recovery resulted in him having an extreme allergic reaction that ultimately caused his heart to stop.

After being clinically dead for fourteen minutes, they were able to get his heart going again.  Sometimes with that span, the person may have suffered brain damage and may even be essentially a vegetable, though there are many factors involved as to whether that will be the case (more on this very soon in an upcoming article from our resident writer who is also a paramedic).

In Morgan’s case, it at first looked like that might have happened.  After they got his heart going again, he was comatose and given how long he’d been clinically dead for, it was recommended twice that life support be removed and he be allowed to die.

Nonetheless, after 12 days, he miraculously came out of his coma and was, shockingly, completely fine, suffering no apparent brain damage or other long term problems from the event.

Not being interested in driving truck anymore, he then found a different job and- as near death experiences are wont to do, it made him reevaluate his life, including within a year making the decision to propose to Lisa Wells, his long-time girlfriend.

No doubt feeling pretty lucky not only to be alive, but to have his girlfriend agree to marry him, he bought a scratch lottery ticket. The result? He won a car worth about $17,000 Australian (today about $23,903 US and $25,099 Australian).

Normally winning a car isn’t a big enough story to get the media to pay attention to you, but given that Morgan had recently been clinically dead for 14 minutes, the local Melbourne news decided to do a feature on him.

In the process, they asked Morgan if he wouldn’t mind buying another lotto ticket and then scratching it off on camera for them, as a sort of re-enactment of his winning scratch.

He happily obliged. After scratching the ticket on camera, though, he stopped, looked at the camera, and rather than be excited and saying something like “I just won a car” as part of the reenactment, he instead said “I just won $250,000.  I’m not joking!” This was the jackpot for that particular scratch lotto he was playing (today about $369,102 Australian or $351,526 US ).

Needless to say, the reporters on scene got more than they bargained for during the reenactment, as did Morgan, who immediately called his fiancée to tell her the good news about his win and that they would now be able to get a house.

As for his fiancée, of the second win, she told the media, “I just hope he hasn’t used all his good luck up”.

In 2006, Abraham Shakespeare, who was near illiterate and had dropped out of school in the 7th grade, won $31 million. Like so many others who win a big ticket lottery prize, he didn’t spend much on himself.  He just bought himself a $1 million home, a Nissan Altima, and a Rolex watch.  Beyond that, like most in his situation, he ended up blowing much of his money on family and friends.   Eventually he wised up, stating, “I’d have been better off broke….  I thought all these people were my friends, but then I realized all they want is just money.”

Three years later, he suddenly disappeared.  One year after this disappearance, his body was found- he was murdered by one of these people who pretended to be his friend.  The murderer was Dorice Donegan Moore.  Moore had used a variety of means to get Shakespeare to give her millions.  She even started a business with him that she was going to run.  After it was founded and the bank account full, she withdrew $1 million and went on vacation.

In the interim between his disappearance and his body being discovered, his family at first thought he’d just become fed up with the constant stream of people begging for money, and just left to start a new life.  In the end, they began to grow suspicious of Moore’s apparent attempts to make everyone think Shakespeare was still around, such as texting people from his phone (which was a major red flag because he was near illiterate), and paying people to say they’d seen him, including offering $200,000 to Shakespeare’s son to tell detectives he’d seen his father recently.  She even attempted to pay someone $50,000 to say they murdered him.  She was finally arrested and the body found after attempting to pay someone to move the corpse.

Investigations later revealed, completely unrelated to any of this, Moore had previously attempted to say that her car was stolen and that she was kidnapped and raped in the process.  She even taped her own wrists, threw herself from someone’s car, and took a rape exam.  Why did she do any of this?  Because she was behind on payments for her car and it was going to get repossessed; this was her way of trying to get to keep it, by claiming it was stolen…

If that wasn’t bad enough, take the tale of one William “Bud” Post III: Bud won $16.2 million in 1988 (about $30 million today).  After winning, his ex-girlfriend sued him, claiming she deserved a share of the winnings.  She won.  His own brother hired someone to kill him and his wife- no doubt hoping to be able to inherit some of the winnings.  William quickly blew through the money buying houses, investing in various business ventures proposed to him (read: people scamming him as so often happens to big ticket lotto winners), cars, and other such things for himself and his family and friends who incessantly bugged him for money. Within 1 year of winning the $16.2 million, he was $1 million in debt, then filed for bankruptcy, and started living on food stamps and a $450 social security stipend.  He died in 2006 at the age of 66.