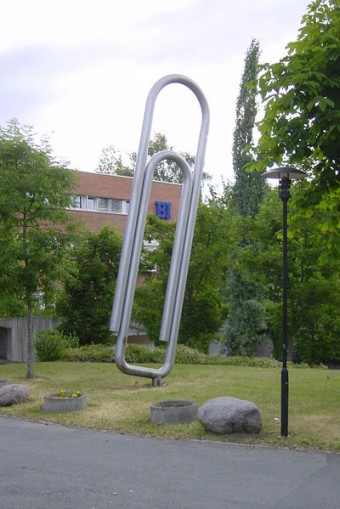 Today I found out that the paperclip was used as a symbol of resistance during World War II.

In April of 1940, just a few months into World War II, Adolf Hitler knew that he needed a way to break past the Allied blockade of Germany if he had a hope of winning the war. He set his sights on Norway—a risky endeavour, but control of Norwegian waters would make transporting goods into Germany a little bit easier. Norway had declared itself neutral in the conflict, but Hitler wasn’t about to let a little thing like neutrality stop him from getting what he wanted.

After a few months of struggle, the Germans successfully began their occupation of Norway, driving Allied troops out. The Norwegian royal family and government were also driven away, forced to conduct business from exile in England. Meanwhile, the people of Norway lived under German rule.

With the real Norwegian government out of the way, the Germans attempted to strip away Norway’s culture and replace it with Nazi ideals. Norwegian teachers were told to join the Nazi Party and teach Nazism in classrooms, and the church was told to teach “obedience to the leader and the state.”

Anti-Jewish legislation was passed, culminating in the deportment of 700 Norwegian Jews to Auschwitz. Mass executions were not unheard of, though most were done on a smaller scale in comparison to the horrific events taking place in certain other areas of Europe. The people of Norway also had to deal with German soldiers day in and day out for five years. By 1945, some 400,000 German troops were operating in Norway, controlling the population of about 4 million people.

It was in the autumn of 1940 when students at Oslo University started wearing paperclips on their lapels as a non-violent symbol of resistance, unity, and national pride.

Symbols related to the royal family and state had already been banned, and they wanted a clever way of displaying their rejection of the Nazi ideology. In addition to wearing a single paperclip, paperclip bracelets and other types of jewellery were fashioned as well, symbolically binding Norwegians together in the face of such adversity.

Why the paperclip?  Besides the idea of binding things together, it’s thought the paperclip was chosen as a symbol of resistance in part because many people incorrectly believed that the inventor of the paperclip was Johan Vaaler, a Norwegian man. Vaaler was granted a patent for his paperclip in Germany as well as the United States in 1901, though didn’t apply for a patent in his native Norway.

The problem was, he didn’t really invent the thing we call a paperclip, and that paperclip (the Gem paperclip) was around and very popular throughout Europe before Vaaler came up with his design.

Vaaler’s paperclip had the papers inserted by lifting the outer wire slightly and pushing the papers into the clip such that the rest of the clip stood out from the paper at around a 90 degree angle, which was necessary because of the lack of the critical second loop to allow the papers to be more or less embedded in the clip flatly.

Vaaler’s design also made it so the papers wouldn’t be held together very well as they relied only on how bendable the wire used was to hold the papers. The double looped Gem style paperclip, on the other hand, exploits the torsion principle to help bind papers together.

Vaaler’s design was never manufactured nor sold and his patents eventually expired.  Nevertheless, many an encyclopedia falsely credits him as the inventor of the paperclip and the 23 foot tall statue (pictured above) was made in his honor in 1989, even though it shows the Gem paperclip, instead of the one Vaaler came up with.  Further, a commemorative stamp was created honoring Vaaler that also depicted the Gem style paperclip, not Vaaler’s design.

Nevertheless, the idea that the paperclip was invented by a Norwegian man was prevalent and the fact that paperclips bound things together and were cheap, readily available, and not out of place made it seemingly the perfect symbol for non-violent, subtle resistance in Norway.

In time, the Germans caught on to the fact that the paperclip was being used as a symbol of resistance and wearing a paperclip promptly became a criminal offense.