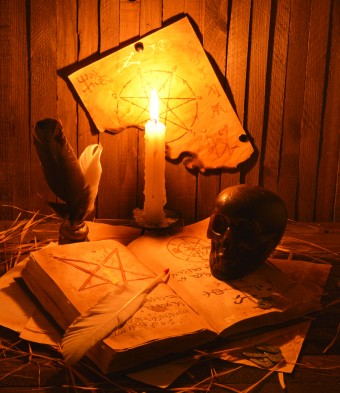 On this day in history, 1692, five people were executed in Salem, MA for witchcraft, as part of the Salem witch trials that occurred between February 1692 and May 1693.

To the 17th century people of New England, as in Europe, Satan wasn’t an abstract concept used to personify evil in the world – he was a living, breathing entity that continually brought misfortunes like quarrels, crop failure, illness or death. The supernatural was a very real part of life for people of that time. God and the Devil were as tangible as the butcher, the baker and the candlestick maker, and to even suggest otherwise in certain regions was unspeakable heresy.

Unlike Europe where convicted witches were generally burned, in the brave New World Satan’s minions were instead condemned to do the “air dance.” When all was said and done, nineteen souls were hanged as a part of the so called Salem “Witch” Trials. One elderly man, Giles Corey, was pressed to death because he wouldn’t plead to either his guilt or innocence in the hopes of not having to forfeit his goods to the Crown. His gamble didn’t pay off, unfortunately.

On August 19, 1692, exactly one month to the day after five of their fellow townsfolk had already had their date with the gallows for the same crime; five more people met their ends at the hands of their town government and churchmen. The condemned were Martha Carrier, 70-year-old George Jacobs Sr., John Proctor, John Willard and former churchman George Burroughs.

Mr. Burroughs was carried in a Cart with others, through the streets of Salem, to Execution. When he was upon the Ladder, he made a speech for the clearing of his Innocency, with such Solemn and Serious Expressions as were to the Admiration of all present; his Prayer (which he concluded by repeating the Lord’s Prayer) [as witches were not supposed to be able to recite] was so well worded, and uttered with such composedness as such fervency of spirit, as was very Affecting, and drew Tears from many, so that if seemed to some that the spectators would hinder the execution.

The accusers said the black Man [Devil] stood and dictated to him. As soon as he was turned off [hung], Mr. Cotton Mather, being mounted upon a Horse, addressed himself to the People, partly to declare that he [Mr. Burroughs] was no ordained Minister, partly to possess the People of his guilt, saying that the devil often had been transformed into the Angel of Light. And this did somewhat appease the People, and the Executions went on; when he [Mr. Burroughs] was cut down, he was dragged by a Halter to a Hole, or Grave, between the Rocks, about two feet deep; his Shirt and Breeches being pulled off, and an old pair of Trousers of one Executed put on his lower parts: he was so put in, together with Willard and Carrier, that one of his Hands, and his Chin, and a Foot of one of them, was left uncovered.

Everybody on Boston’s North Shore finally did come to their senses in the late spring of 1693.