Chickens Were Initially Domesticated for Cockfighting, Not Food 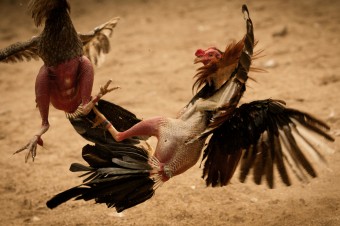 Anyone who’s been chased around the yard by a pissed off chicken knows these birds are neither purposeless nor fearful. Descended from some of the fiercest creatures ever to roam the planet, the blood of today’s Gallus domesticus carries all of the pride, courage, fury and viciousness of its ancestors. Harnessing these qualities by the simple expedient of sticking two males together in a small, enclosed space, people first domesticated chickens so they could enjoy the spectacle of cockfighting.

A Brief History of Cockfighting

It is generally accepted that cockfighting began in Southeast Asia with a particularly bloodthirsty jungle ancestor of today’s chicken, Gallus gallus. At some point, India’s wild and fierce Gallus sonneratii, the progenitor responsible for the modern chicken’s yellow skin, was interbred with the first. Together, both were bred and trained for fighting, and then spread across India and the Middle East by soldiers, travellers and merchants who enjoyed the sport. By some accounts, cockfighting dates back to 4000 BC in Persia and 2500 BC in the Bronze Age civilization of the Indus Valley.

It did not catch on in the West, however, until the Greco-Persian War in the fifth century BC. According to legend, on his way to fight the Persians, the great Athenian general Themistocles spied two chickens fighting on the side of the road and was suitably impressed:

Behold, these do not fight for their household gods, for the monuments of their ancestors, for glory, for liberty or the safety of their children, but only because one will not give way to the other.

Quickly becoming en vogue, to the Greeks the sport meant more than just entertainment, as was reported in The London Encyclopaedia:

At first, cockfighting was partly a religious and partly a political institution at Athens; and was continued for improving the seeds of valor in the minds of their youth, but was afterwards perverted both there and in other parts of Greece to a common pastime, without any political or religious intention.

Despite being conquered by the Romans, the Greeks exerted a lasting influence on them. Along with their culture, architecture, theology and philosophy, the Greeks also introduced the Romans to cockfighting. The conquerors so loved the sport that they immortalized it on silver coins and in gorgeous mosaics. As the Romans expanded their empire, ultimately spanning three continents and controlling 25% of the world’s population, they brought their culture, which included cockfighting.

Europeans embraced the sport in the Dark Ages, and zeal for cockfighting was not abated by either the intellectual re-birth of the Renaissance, or the newly found humanism of the Enlightenment. Elizabeth I, James I, Henry VIII and Charles II are all reported to have enjoyed what was known as the “Royal Pastime,” and later, when America was colonized, Europeans brought the sport with them. In fact, several founding fathers, including Thomas Jefferson, George Washington and Benjamin Franklin, were known to have not only watched the matches, but competed with their own birds as well.

Cockfighting continued as a legal sport through the Civil War (1861-1865), and it is rumored that our 16th President, Abraham Lincoln, earned his moniker “Honest Abe” because of his reputation for fairness in refereeing cockfights.

Shortly thereafter, however, several groups began to oppose the practice. Beginning in 1866 with the Society for the Prevention of Cruelty to Animals, activists worked avidly to outlaw the sport. Surprisingly, however, cockfighting was not illegal in all 50 states until 2007, when Louisiana finally banned it.  The Animal Fighting Prohibition Enforcement Act, also passed in 2007, has made it a federal crime to transport cockfighting implements (presumably also including the birds) across state and national borders.

Sadly, the sport continues to this day. According to the Humane Society, cockfights occur regularly in the United States and across the globe. In fact, this past summer in Eastern Oregon a former sheriff’s deputy and his wife were arrested and charged with running an illegal gaming operation and for violating the Animal Welfare Act. Allegedly, they were operating cockfighting derbies on their rural property.

The Vicious Pedigree, and Sad Evolution, of the Majestic Chicken

In 2003, a paleontologist found a fossilized bone of a Tyrannosaurus rex in Montana with what experts describe as “a still-elastic blood vessel” inside. Experts who study the evolutionary relationships among different species and populations (phylogenetics) examined the vessel and determined that “the closest living relative of T. rex is none other than the domestic chicken.”

As humans began to live in settlements alongside Gallus gallus, Gallus sonneratii and other wild fowl, they soon began domesticating them. Although the precise mechanism of domestication is unknown, experts have identified four stages in the process:

Is Gallus domesticus Better Off Today?

Although most of us no longer force chickens into lethal armed combat for our amusement, the horrific conditions endured by the vast majority of today’s chickens, some would argue, is no better. Rather than judging our forebears for their cruelty and bloodlust, perhaps those of us who eat chicken should first think of our own callousness and voracity. Or not. We could just sit down to a tasty plate of General Tso’s.  It’s so good! 😉