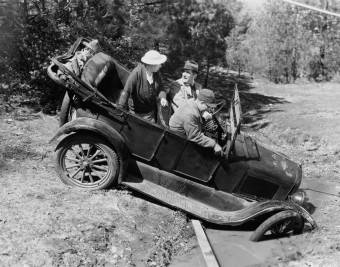 Car accidents are a sad fact of life. Every day thousands lose their lives in collisions, crashes and accidents. Though the car itself is a fairly recent invention, the first recorded accident involving them could have happened almost 300 years ago, depending on what your definition of a car is.

Though it looked nothing like the modern cars you see on the road today, the very first accident involving an auto-mobile is said to be one involving the creation of French inventor, Nicolas-Joseph Cugnot in 1771. Cugnot supposedly built the very first “self propelled mechanical vehicle” capable of carrying passengers. We added that extra part at the end because the first “car”  (a word we use in the loosest possible sense) was thought to have been invented by Father Ferdinand Verbiest, a Flemish missionary in China.

Verbiest’s invention was literally intended to be nothing more than a toy for a Chinese emperor. As such, the final creation (if it was ever created at all) was far too small to accept passengers; thus, Cugnot holds the title of creating the first known auto-mobile that you could ride in. However, as noted in this Jalopnik article, Leonardo da Vinci beat everyone to the punch by two clear centuries in coming up with the basic idea of powered transport.

But we digress, Cugnot’s, fardier à vapeur (steam dray), is likely the very first built and assembled steam powered vehicle in history that could transport a human being, though it never actually saw widespread use. The story goes that some time in 1769 Cugnot showed French officials his prototype design for a steam wagon capable of carrying cannons for the military; however, it wasn’t until 1771 that Cugnot had a working prototype people could ride on. Cugnot then reportedly invited several French officials to join him on the maiden voyage. During the trip, the vehicle careened out of control and smashed into some unlucky person’s garden wall at a nail-biting 2MPH. However, some historians question whether this event actually happened, due to scant direct documented evidence.

To find a better documented accident, you actually need to travel 98 years into the future to 1869. On August 31st in the City of Birr in Ireland, Mary Ward, a scientist and writer had the unfortunate privilege of becoming the first known person to be killed by an auto-mobile. On that day, Mary and three companions were enjoying a trip on a steam powered carriage. While in motion, the carriage hit a bump, throwing Mary from her seat and into the path of one of the carriage’s wheels where she was crushed and instantly killed.

Mary’s death was reported the next day in the King’s County Chronicle and a formal inquest was held to discover the cause of death and whether anyone was at fault. In the end, the jury decided that Ward’s death was nothing more than a terrible accident, though the reason for the carriage suddenly jolting and throwing Mary to the ground was never discovered.

This murderous steam carriage itself was invented by the pioneer of the steam turbine and Ward’s cousin, Sir Charles Algernon Parsons and his brother. Remarkably, Parsons was only 15 in 1869 when he invented one of the earliest precursors to modern transport.  Although, at 16, Alexander the Great was busy conquering Maedi, when they dared revolt against Macedonia; also, at 16, a peasant girl by the name of Jeanne d’Arc, aka Joan of Arc, was taking her first steps into historical awesomeness by having the gall to approach a garrison commander and trying to tell him how to do his job… so take that Sir Parsons.

Parsons didn’t just invent the death mobile, he and his brother were two of the passengers on board the carriage when Mary was killed. Luckily for the world, Parsons wasn’t deterred from inventing by this terrible accident and went on to contribute massively to the world of engineering.

It would take until 1896 for the first fatal accident to occur on English soil whereas the first accident in the US occurred five years earlier than this in 1891. In the case of the former, the victim, Bridget Driscoll, was struck and killed by an auto-mobile going 4MPH. If you’re wondering how Bridget was hit by a raucous vehicle powered by explosions and fire travelling slower than most people walk, according to witnesses of the time, Bridget saw the vehicle “zigzagging” towards her and simply froze out of either fear or utter confusion, which resulted in her being unable to get out of the way.

As for the first accident to happen on American soil, this was decidedly less dangerous and ended with all parties leaving unharmed. The event occurred in Ohio in 1891 and it involved auto-mobile legend John William Lambert. The accident itself was the result of Lambert hitting a tree root and swerving out of control… If only he’d thought to invent power steering first.

So, in the end, there are two possible stories about the world’s first car accident; it’s either, “A lady was horribly crushed in front of her teenage cousin by the invention he created in 1869“, or “A Frenchman smashed into a large stationary object at 2 MPH in 1771 and walked away unharmed.” We really wish there was more direct evidence of the latter, because the first one is decidedly less humorous.