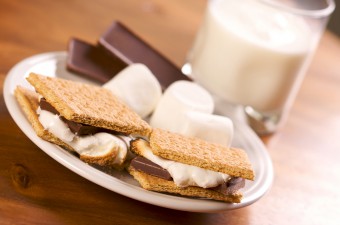 Between 1820 and 1830, America was in the midst of a health craze. Sylvester Graham, the creator of the graham cracker, was on scene with a diet plan he thought ought to increase physical wellness, sexual purity, and spiritual health.  The Presbyterian minister from New Jersey was an avid vegetarian, and on a mission to rid the world of sexual immorality. Graham believed wholeheartedly that a vegetarian diet devoid of spices and sugars, combined with avoiding foods made with overly processed flours that often had chemicals added, would do away with the greatest evil of his day – lustful thought. More specifically, he concerned himself with ridding the world of masturbation, an act he and others thought led to insanity and blindness.

First, a little background- Graham spent his early adult years as a farmhand and teacher. Later in life, ill health caused him to turn his attention to ministry work. His background in harvesting and public address equipped him to preach about the relationship between diet and piety, giving birth to the “Graham Diet”.  Individuals inspired by Sylvester Graham’s teaching lived in community with one another, and observed Graham’s strict diet and living habits, all while working to spread the idea that diet had a profound effect on righteous living.

A part of the Graham Diet was what is today called “graham flour”, which is essentially a type of non-bleached, “all-natural” finely ground whole wheat flour.  Among other things made with this flour, Graham would make what would come to be called “graham crackers”.

At their inception, graham crackers were incredibly bland. The minister preached a high-fiber, whole wheat diet. His followers faithfully abstained from meat and sweeteners, like honey and sugar, and drank only water.  He also wasn’t a fan of spices. Graham also consistently reminded his congregation that consuming food produced by animals led to impure thoughts and actions, with the exception of eggs, milk, and cheese which according to his diet could be consumed, but only if they were absolutely fresh.

With such diet restrictions, it’s no surprise that original Graham crackers lacked flavor. They were not the sweet treat we enjoy today. The first flour used to make the wafers was a winter wheat. The endosperm of the wheat was extracted and ground into a fine powder. The bran and germ of the winter wheat was added to the mixture creating a course type of flour. The unrefined flour yielded a naturally nutty flavor and very slight sweetness. This supported the crux of Graham’s theory, that bland food kept one pure in thought and deed.

Since the days of the Graham Diet, the cracker recipe has evolved significantly. For instance, Nabisco began making Graham crackers with bleached white flour and oils. The germ is rarely used as excluding the germ in the flour mixture results in the crackers having a longer shelf life. Today, grocery stores carry Graham crackers of all flavors: sweetened with honey, cinnamon sugar, and more. You can even snack on chocolate flavored crackers.  Beyond that, common ways to eat these crackers include smothering them with peanut butter, crushing them up for cheese cake and pie crusts, as well as cloaking them in frosting and decorating them in gumdrops to replicate winter cottages.  That’s not to mention that they are traditionally used as the outer layer of a tasty little marshmallow and chocolate sandwich by campfires the world over. If there is indeed a hole in the floor of heaven, and Sylvester Graham is looking down, he is surely not happy about any of this.

Of course, neither Graham crackers nor his diet have ever been shown to even remotely cure sexual urges, so perhaps he can’t complain too much.

Sylvester Graham didn’t just give us the Graham cracker, though. His influence is believed to have impacted the direction of other popular branded food items.  For instance, Dr. John Harvey Kellogg and his brother, Will, found the minister’s ideas useful at their Sanitarium in Michigan. Dr. Kellogg imposed the vegetarian diet on his patients with the belief that it could cure some of their troubles. Abiding by such a healthy diet was sure to strengthen overall health. The brothers even made Graham crackers on the premises of the ward.

Eventually Will left out some prepared wheat used to make the facility’s Graham crackers. When he came back to finish the cooking, the dough had become hard and stale. As there wasn’t money to waste a whole batch’s ingredients, he used it in the baking process anyway. Rather than get thin wafers after extruding the dough through the rollers, he ended up with hard crispy flakes – somewhat similar to the corn flakes we eat for breakfast today.

This accident didn’t bode well for the brother’s relationship.  After the invention of the flakes, which the people at their Sanitarium enjoyed, Will decided to market them and felt that adding sugar would help them sell better.  Needless to say, John found this to be borderline blasphemous and the two parted ways with Will founding the now billion dollar Kellogg corporation (which besides their tasty flakes was soon to also introduce another  breakfast staple, Rice Krispies), while his brother stuck more to his original principles and continued to dedicate his life to ridding the world of such acts as masturbation. No doubt Sylvester Graham would be surprised to know that his bland invention led to so many American staple food items.