This Day in History: December 6 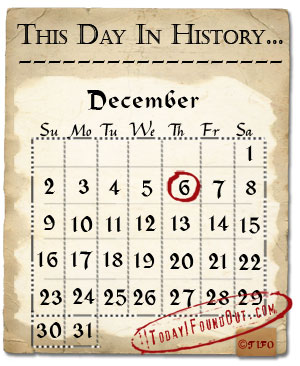 On this day in history, December 6:

1768: The Encyclopædia Britannica makes its debut in Edinburgh, Scotland, with the first volume being sold for 6-8 pence (varying price based on quality of paper), with each subsequent volume being released in weekly installments.  All total about 3,000 copies of the first set of the encyclopedia, comprising 2,391 pages, were sold for a total cost of 12 pounds sterling.  The original editions also included elaborate illustrations.  The idea to publish this new English Encyclopedia came from Colin Macfarquhar who was by trade a bookseller.  He teamed up with Andrew Bell, an engraver, and editor William Smellie to make the encyclopedia.

Macfarquhar had been inspired to make the encyclopedia, despite the commercial failure of many previous English encyclopedias, by the French Encyclopédie which comprised of 35 volumes, 71,818 articles, and 3,129 illustrations.  It later was expanded to 166 volumes by over one thousand workers and 2,250 contributors. (Famous contributors to this encyclopedia included Voltaire, Rousseau, and Montesquieu.  The top contributor was Louis de Jaucourt who wrote 17,266 articles spanning from 1759-1765 at a rate of about 8 articles per day.  One presumes he was paid by the article and not by the hour for that kind of efficiency. 😉 If this number of articles, all hand written, seems impressive, it should be noted that there was an encyclopedia written in 1408 that had nearly 1 million pages and 370 million Chinese characters, along with thousands of beautiful illustrations that took just 17 months to compose.  Up until Wikipedia, it was the largest encyclopedia ever made.  You can read more about it here.)

In any event, a couple of the controversies surrounding the original Britannica mirror closely some of the controversies surrounding Wikipedia.  For instance, the early question of plagiarizing content-  the original Britannica also “borrowed” heavily from numerous other authors without compensation and sometimes without credit.  Of this, the editor Smellie said:

I wrote most of it, my lad, and snipped out from books enough material for the printer. With pastepot and scissors I composed it!

The other main criticism of Wikipedia is of course the inaccuracies.  Britannica suffered from the same problems in the early days (and in truth, no encyclopedia nor other educational writings covering a broad swath of subjects ever fully get away from this problem).  Smellie had this to say about the deficiencies in scholarship:

With regard to errors in general, whether falling under the denomination of mental, typographical or accidental, we are conscious of being able to point out a greater number than any critic whatever. Men who are acquainted with the innumerable difficulties of attending the execution of a work of such an extensive nature will make proper allowances. To these we appeal, and shall rest satisfied with the judgment they pronounce.

Smellie and his colleagues felt that the utility of their encyclopedia, which innovatively grouped related topics together and then alphabetized them, was much more important than perfect scholarship.  He stated, “utility ought to be the principal intention of every publication. Wherever this intention does not plainly appear, neither the books nor their authors have the smallest claim to the approbation of mankind.”

Today the print version of the Encyclopedia Britannica is no longer produced, with the last such edition published in 2010 in 32 volumes.  Britannica instead switched gears to focus more on the digital side of things, with a current subscription rate of about a half a million online subscribers who pay about $70 a year, so a gross of about $35 million annually from that. On top of that, they reportedly make 85% of their income today from math, science, and English language course materials for schools. So, while the print editions have stopped, the online version of the Encyclopædia Britannica is still going strong- at least for now- some 244 years later.