This Day in History: December 5 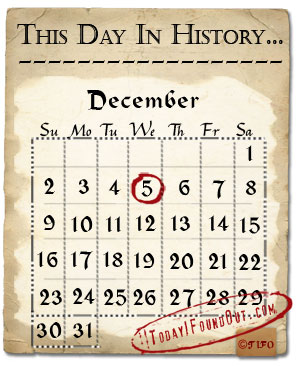 On this day in history, 1933, Prohibition officially ended when Utah became the 36th state to ratify the 21st Amendment, originally proposed by Congress on February 20, 1933.  Once ratified, this constitutional amendment repealed the 18 Amendment.

The 18th Amendment, passed in 1919, banned the manufacture, sale, and transportation of alcoholic beverages in the United States (note: it didn’t ban the consumption  or home-storage of alcohol).  The Volstead Act, officially the “National Prohibition Act”, laid out the rules for this ban and was passed on October 28, 1919, despite President Wilson’s veto. Prohibition itself began on January 1, 1920.

Interestingly, Prohibition was widely supported by diverse groups across the nation when it first was made law, even among heavy drinkers.  It was thought that a ban on alcohol would drastically improve society as a whole (many of society’s problems of the day were thought to be a result of rampant alcohol abuse).  Thus, sacrificing alcoholic drinks was a little thing compared to creating a better society.  Will Rogers often joked about the southern prohibitionists: “The South is dry and will vote dry. That is, everybody sober enough to stagger to the polls.”

Because the Volstead Act banned the manufacturing, sale, and transport of alcohol, but did allow home brewing of wine and cider from fruit, grape growers of the day began selling “bricks of wine”, which were primarily blocks of “Rhine Wine”.  These often included the following instructions: “After dissolving the brick in a gallon of water, do not place the liquid in a jug away in the cupboard for twenty days, because then it would turn into wine.”

As happens quite often when people are told they can’t do something, the banning of alcohol during Prohibition resulted in alcoholic beverages being consumed at an estimated three times the rate they were before the banning took effect.