This Day In History: November 21

On this day in history, November 21st… 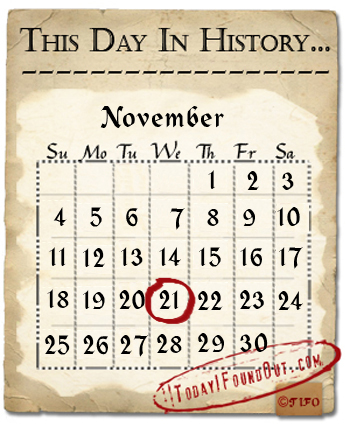 1877 : Thomas Edison announced the first of his inventions, the phonograph, a tinfoil cylindrical device that could not only record sounds, but could also re-play the recorded sound.  While  experimenting with a way to record telephone communications at his laboratory in Menlo Park, New Jersey, Edison developed a device using a stylus on a tinfoil cylinder. Over the years improvements were made to the tinfoil phonograph- for example,  they started using wax-coated cardboard cylinders, and a cutting stylus that moved from side to side in a “zig zag” pattern across the record; the device progressed to become the gramophone.

1905 : The “Annalen der Physik” science journal published Albert Einstein’s paper “Ist die Trägheit eines Körpers von seinem Energieinhalt abhängig?” (that translates to ‘Does the Inertia of a Body Depend Upon Its Energy Content?’) that led to probably the most famous equation in the field of physics: E = mc². In his paper, Einstein argued the relationship between mass and energy and the concept that the mass of a body is a measure of its energy content.

1916 : The Britannic, sister ship to the Titanic, sunk in the Aegean Sea due to an explosion (believed to be a mine), killing 30 people. Launched on February 26, 1914, after improvements & modifications were made because of the Titanic disaster, the Britannic never got a chance to start it’s transatlantic route  between New York and Southampton because war broke out (World War I). The military authorities requisitioned a large number of ships, including the Britannic, and put it  into service just as they had completed her trials. In November of 1915, the Britannic was taken out of storage in Belfast and  requisitioned as a hospital ship. She was subsequently renamed HMHS (His Majesty’s Hospital Ship) Britannic. After 5 successful trips between the Middle Eastern Theatre and the United Kingdom, transporting the sick and wounded soldiers, the HMHS Britannic departed for her sixth voyage on November 12th, 1916. In the morning hours of November 21st, the ship was rocked by a violent explosion near the Gulf of Athens in the Aegean Sea. The exact cause, whether a torpedo attack or a mine, was not clear, but the damage was done and six whole compartments (more than the Titanic’s damage) were instantly flooded. Built in the wake of the Titanic incident, this ship was designed to stay afloat even under such circumstances. However, the Captain decided to try to run the Britannic aground on the nearby island of Kea. While it seemed like a good idea, water gushed through the portholes that the staff had left open to air out the sick wards. Realizing that the ship had no hope and was going to sink, the Captain ordered an evacuation and the life boats were launched, saving 1,036 of the 1,066 people on board. The ship sunk less than an hour after the explosion.

1976: The original “Rocky” movie first premiered in New York City. Written and starring Sylvester Stallone, the movie about the underdog prizefighter Rocky Balboa was shot in 28 days on a budget of $1.1 million. The movie was first released on this day in New York and was later released in theaters across the United States.  It became a huge box-office success, being the highest grossing film of 1976; it had one of the highest return of investment of any film ever made; and receiving 10 Academy Award nominations, including Best Actor and Best Original Screenplay for the then-little known Stallone. It ultimately won 3 Oscars including the Best Picture Award and shot Stallone to star status in Hollywood. Today, more than 30 years later, the movie has earned a reputation as a classic and is still considered one of the best in the sports genre of films.

tagged with november 21st, this day in history