This Day In History: November 20

On this day in history, November 20th… 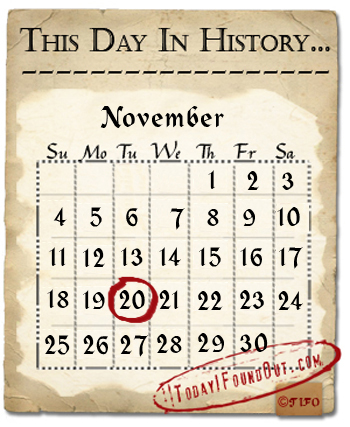 1873 : The two rival cities occupying the banks of the river Danube, “Buda” on the west-bank and “Pest” on the east-bank, were united to form the capital city of Hungary, now known as Budapest. The basin Hungary lies in had been populated by successive peoples for thousands of years- Celts, Romans, Huns, Mongols, Turks, Slovaks, Austrians, Germans and Russians have all occupied and re-forged Hungary’s identity many times over. After centuries of battles and struggle for independence, in 1867 a Dual Monarchy of Austria and Hungary was established. On November 20th, 1873 the hilly, residential town of ‘Buda’ along with the historic ‘Óbuda’ (ancient Buda) were officially merged with the flat, industrial town ‘Pest’  to form what was at first called Pest-Buda. This new union brought about an unprecedented economic, cultural and intellectual rebirth to the region.

1947 : Princess Elizabeth (now, Queen Elizabeth) wed Lieutenant Philip Mountbatten (now, Duke of Edinburgh) at Westminster Abbey in London. Elizabeth II, daughter of King George VI and his wife Queen Elizabeth (The Queen Mother), first met Prince Philip of Greece and Denmark at a wedding of one of Philip’s cousins in 1934. After their second meeting in 1939, although Elizabeth was only 13 years old, the two began exchanging letters and fell in love. In 1946, Philip asked the King for his daughter’s hand in marriage and the two were secretly engaged, but didn’t make a formal announcement until after Elizabeth’s 21st birthday the next year. Like most Royal weddings, the wedding ceremony took place at  Westminster Abbey and was officiated by the  Archbishop of Canterbury, Geoffrey Fisher, and the Archbishop of York, Cyril Garbett. The ceremony was broadcast over the BBC radio to millions around the world and was followed by a reception breakfast at Buckingham Palace.

1979 : A large group of Islamist dissidents took over the Grand Mosque (Al-Masjid al-Ḥarām) , in Mecca, taking thousands of pilgrims as hostage. Led by  Juhaiman ibn Muhammad ibn Saif al Otaibi, the dissidents believed that Juhaiman’s brother-in-law Mohammed Abdullah al-Qahtani was the redeemer of Islam known as Mahdi,  as per the prophesies of the Prophet Muhammad, because Otaibi claimed to have had a vision sent by God telling him so.  Qtaibi gained a large group of supporters who believed Qahtani was the rightful Mahdi and spread their radical message in different mosques around Saudi Arabia.  On November 20th, 1979, the first day of the year 1400 according to the Islamic calendar, Qtaibi along with a large group (said to have been between 400-500)  of his followers ranging from theology students to  former military officials of the National Guard, staged an attack at the 5 am prayer time at the Grand Mosque. They were heavily armed and the few policemen present were armed only with wooden clubs for disciplining unruly pilgrims, and so were no match for them. Chaining the gates shut, the group of 500 odd fundamentalists laid siege to the mosque for two weeks, leaving the Saudi government at a loss as to what to do. Finally, the Saudi National Guard and the Army managed to reclaim most of the mosque, but the massive 7-acre compound with catacombs and several underground passages under the mosque made it hard to capture all the insurgents. By the end of the 2-week ordeal, over 255 pilgrims were killed and about 560 injured, not to mention military casualties of 127 and 451 injured. This incident resulted in long-term repercussions, not only for other Islamic nations, but the United States as well, as some believed the attack was the work of American imperialism. There were several anti-American Muslim demonstrations, riots, and attacks on U.S embassies  all over the World.

tagged with november 20th, this day in history