The Longest Game by Innings in Major League Baseball History 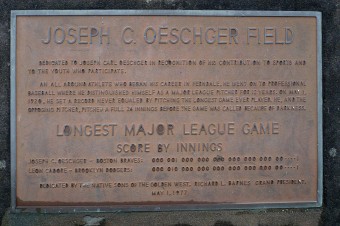 It was a cloudy, overcast Saturday morning on May 1, 1920.  Pitcher Joe Oeschger (pronounced esh-ker) didn’t even think the game would be played, as it had rained most of the morning.  And even if it was played, he didn’t think he would be the starting pitcher.  “Manager (George) Stallings usually pitched me on Sundays because I went to church”, he recalled.

Oeschger did turn out to be the starter for the Boston Braves that day at Braves Field.  His opponent would be Leon “Caddy” Cadore of the Brooklyn Dodgers.  Oeschger was glad to be going against Cadore that day, as “Caddy” had beaten him 1-0 earlier in the season in an 11-inning pitching duel. “I wanted to even things”, he recalled.

The soon-to-be-legendary game started precisely at 3:00 p.m.  The Dodgers drew first blood in the fifth inning, when Ernie Krueger scored on Ivy Olson’s single.  The Braves came right back to tie the score in the sixth, when Walter Cruise tripled and scored on Tony Boeckel’s single.

It seemed like a routine ballgame at the time, a 1-1 tie to be decided in a future inning.  Little did either team realize that all scoring was over for the day- and for the next 20 innings.

The seventh, eighth, and ninth innings went by and the 1-1 match moved on into extra innings. (In the 7th, Oeschger retired the side on just three pitched balls.)  The Braves had a chance to finish the Dodgers off in the bottom of the ninth when they loaded the bases with one out, but Braves second baseman Charlie Pick hit into an inning-ending double play.

Both pitchers kept shutting their opponents down, inning after inning.  “Cadore had a good curve ball and I had a good, live fastball that day”, Oeschger later said.

In the 17th inning, the Dodgers loaded the bases with one out, but again came up empty.  By the 18th inning, Oeschger started to tire (yes, he was still pitching), but his teammates kept telling him, “Just one inning, Joe, and we’ll get a run.”  (Oeschger was no stranger to marathon pitching duels. As a pitcher for the Philadelphia Phillies in 1919, he had pitched a 20-inning 9-9 tie game against these same Brooklyn Dodgers.)

By the end of 24 innings, the 1-1 tie score remained and the teams were off into unexplored territory, as no game in Major League Baseball history had ever lasted 25 innings.

The 25th inning went by scoreless, as did the 26th.

It was now 6:50 p.m. (incredibly, by today’s standards, the longest game by innings in MLB history lasted only 3 hours and 50 minutes.)

By the end of the 26th, plate umpire Barry McCormick saw the lights going on in buildings across the Charles River.  He decided to call the game a draw.  The players on both teams begged McCormick to change his mind.  They wanted to go one more inning, to make it not only the longest-ever game, but the equivalent of three full games.  Their arguments and beseechings fell upon deaf ears and the 26-inning 1-1 tie was to go indelibly into the baseball record books.

As there were no electric lights in the press box at Braves Field, the reporters and telegraphers had to submit their accounts of the game by candlelight.

Some sources list the game’s attendance at 2,000; others have it at 3,500; still others list it at 4,500.  Whatever the case, records fell by the dozen.  Joe Oeschger’s 21 consecutive scoreless innings pitched in one game seems more an unbreakable record than Joe Dimaggio’s 56-game hitting streak or Pete Rose’s 4,256 hits.

“Caddy” Cadore faced 95 Braves that day. Oeschger faced 90 Dodgers.  Walter Holke, the Braves’ first baseman, made an ungodly 43 putouts at first base. And pity poor Charlie Pick.  Pick, the Braves’ second baseman, had the single worst offensive day in history, going 0 for 11 at the plate.  (Charlie also made an error that day, adding salt to the wound in his ignominious performance.)

The batting “stars” of the day were both Braves- Tony Boeckel, their third baseman, went 3 for 11, while shortstop Walter “Rabbit” Maranville went 3 for 10.

After the game, Joe Oeschger stated, “I felt a little tired, but I was more fatigued in some 9-inning games when I got into many jams. There weren’t too many tight situations”.  Oeschger did miss his next start, but not because of a sore arm.  He pulled a leg muscle running around the park and didn’t pitch again until 12 days later because of the leg injury.

Cadore’s arm fatigue seems to have been worse: “My arm stiffened. I couldn’t raise it to comb my hair for three days.  After seven days of rest, I was back taking my regular turn”. He added, “I never had a sore arm before or after the game. I suppose the nervous energy of trying to win the game gave me the strength to keep going.”

There was no game the next day (to, I am sure, the vast relief of both teams.)  The Dodgers then went to Philadelphia, where they lost a 13-inning game to the Phillies.  The following day, they returned to Boston, this time losing to the Braves in 19 innings.  This spell of 58 innings played in three games remains an unparalleled feat as well.  And all the Dodgers had to show for it was two losses and one tie.

Happily, despite these three games of what must have been unbelievable frustration, the Dodgers did go on the win the National League Pennant that year, before losing five games to two in the 1920 World Series to the Cleveland Indians.