How The Sport Of Basketball Got Started 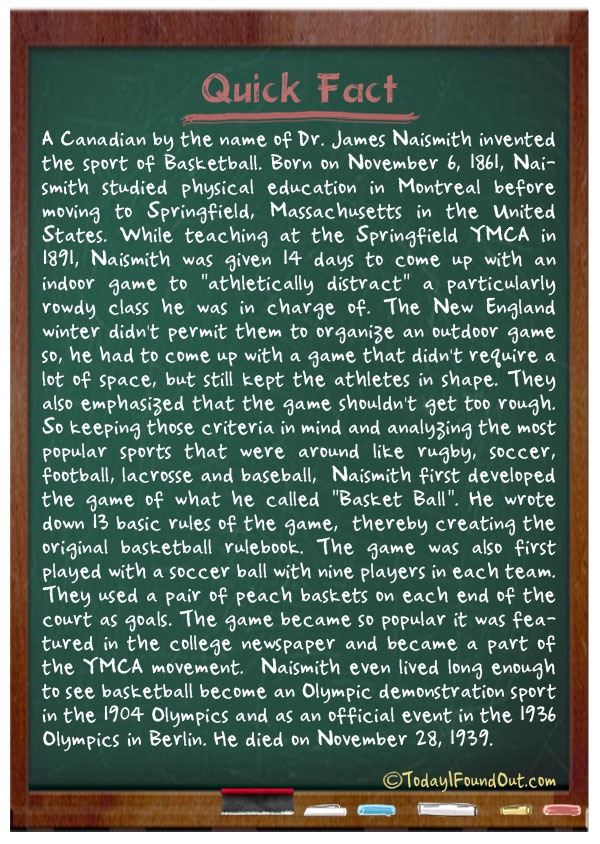 Text Version:
A Canadian by the name of Dr. James Naismith invented the sport of Basketball. Born on November 6, 1861, Naismith studied physical education in Montreal before moving to Springfield, Massachusetts in the United States. While teaching at the Springfield YMCA in 1891, Naismith was given 14 days to come up with an indoor game to “athletically distract” a particularly rowdy class he was in charge of. The New England winter didn’t permit them to organize an outdoor game so, he had to come up with a game that didn’t require a lot of space, but still kept the athletes in shape. They also emphasized that the game shouldn’t get too rough. So keeping those criteria in mind and analyzing the most popular sports that were around like rugby, soccer, football, lacrosse and baseball,  Naismith first developed the game of what he called “Basket Ball”. He wrote down 13 basic rules of the game,  thereby creating the original basketball rulebook. The game was also first played with a soccer ball with nine players in each team. They used a pair of peach baskets on each end of the court as goals. The game became so popular it was featured in the college newspaper and became a part of the YMCA movement.  Naismith even lived long enough to see basketball become an Olympic demonstration sport in the 1904 Olympics and as an official event in the 1936 Olympics in Berlin. He died on November 28, 1939.  More Here