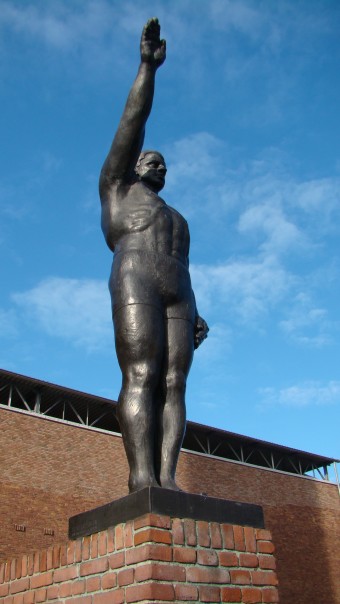 Today I found out the official Olympic salute strongly resembles the “Heil Hitler” or “Nazi” salute.

In this Olympic salute, your right arm should be held out, slightly to the side, and pointing in an upward angle.  Likewise, your palm should be out and your fingers touching.  The Nazi salute is more or less performed the same way, except it is customary to hold your arm straight in front of you, instead of partially to the side.  As you might imagine, the Olympic salute fell out of favor after WWII.  Despite this, the International Olympic Committee hasn’t yet replaced it with a different salute, even if nobody would dare use it anymore for fear of being misinterpreted.

The similarity of the salutes ultimately led to a great deal of confusion during the 1936 Olympics in Berlin over whether many of the non-German teams were saluting Hitler using the Nazi Salute or whether they were using the official Olympic salute.  This even fooled German audience members who sometimes misinterpret the Olympic salute given by some teams as the Nazi salute and subsequently cheered more for those teams as they passed, such as the standing ovation the French team received when they gave the misinterpreted Olympics salute.  Because the same confusion came up during the Winter Games a few months before, Britain decided to abstain from giving any kind of salute, so as not to be misinterpreted as saluting Hitler with the Nazi salute.

They marched in a procession once around the arena, saluting the dais, each nation, according to its custom, as they passed; then, turning across the field, they took their stand in columns great and small in front of the Fuehrer and the guests of honor, their flags at their head.

Quite naturally, in this long march the interest was centered in the applause given respectively to each and the type of salute each nation gave the dais. The last item wasn’t always easily determined because the Olympic and Nazi salutes are very similart…

The Turks were the only team to give a military salute throughout. The Bulgarians drew down handsome applause by flattering German sympathies in a double way. They goose steeped past Hitler and gave the Nazi salute to boot.

The New Zealanders evidently mistook an erect German athlete in white who stood out in front, far to the left of the stand, for the Fuehrer himself, for they removed their hats for this outstanding figure and put them on again while passing the dais.

Some teams apparently did not know the difference between the Olympic and Nazi salutes and rendered mixed homage. The Nazi salute was given by Afghanistan, Bermuda, Bolivia and Iceland, besides, of course, Italy which originated it, and the Germans.

But all the flags of the nations were lowered while passing Hitler with one exception; that of the United States went by proudly borne aloft. An official statement published in all newspapers, however, explained this as due to army regulations and asked for public understanding in the matter…

In general the salutes stood about equally divided between the Olympic and Nazi, but “eyes right,” was common to all. The Americans provided their own special salute by giving eyes right and placing their straw hats over their hearts. This salute also was adopted by China and the Philippines.

Both the Nazi salute and the Olympic salute are thought to be based on a supposed Roman salute, though no actual Roman text or artworks that describe or show it have survived.  Despite this, in the 19th and early 20th century it became very popular in plays, artwork, and movies to portray this “Roman” salute. This soon resulted in it being adopted by the Italian Fascist Party and then the Nazi Party.

Hitler had this to say about the origin of the Nazi salute during one of his “Table Talks” (January 3, 1942),

I made it the salute of the Party long after the Duce had adopted it. I’d read the description of the sitting of the Diet of Worms, in the course of which Luther was greeted with the German salute. It was to show him that he was not being confronted with arms, but with peaceful intentions. In the days of Frederick the Great, people still saluted with their hats, with pompous gestures. In the Middle Ages, the serfs humbly doffed their bonnets, whilst the noblemen gave the German salute. It was in the Ratskeller at Bremen, about the year 1921, that I first saw this style of salute. It must be regarded as a survival of an ancient custom, which originally signified: “See, I have no weapon in my hand!” I introduced the salute into the Party at our first meeting in Weimar. The SS at once gave it a soldierly style. It’s from that moment that our opponents honored us with the epithet “dogs of Fascists”.