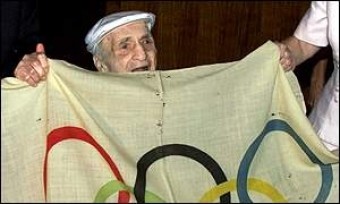 Today I found out the original Olympic flag was missing for 77 years until 1920 Olympian Hal Haig Prieste revealed he’d had it the whole time.

The year was 1920. The Summer Olympics were being held in Belgium in the city of Antwerp.  At the end of the Olympic Games, the flag suddenly went missing.

Fast-forward to 1997 and 101 year old bronze medalist Hal Haig Prieste, who won his medal in 1920 for platform diving, was being interviewed at a U.S. Olympic Committee dinner.  During the interview, the reporter happened to mention the missing flag to Prieste, who then shocked everyone by stating, “I can help you with that.  It’s in my suitcase.”

Prieste went on to reveal that he had been dared by fellow diver Duke Kahanamoku to climb the flag pole and steal the flag, which he did.  He then folded it and put it in the bottom of his suitcases, where it remained some 77 years until he decided to reveal he had it at the dinner.  His reason for finally revealing he had it?  “I thought I ain’t going to be around much longer – it’s no good in a suitcase… I won’t be able to hang it up in my room.”

Prieste returned the flag to the IOC three years later during the 2000 Olympics.  It was in reasonably good shape, thanks to the fact that it had stayed protected all those years in the bottom of his suitcase.  The only real damage to it was that the edge was a little tattered from when he tore it off the flag pole.  The Olympic Committee went about restoring the flag and put it on display in the Olympic Museum in Lausanne, Switzerland.  They also gave Prieste a plaque thanking him for “donating” the flag that he had stolen from them all those years ago.